No goals in Dingwall

Motherwell and Ross County played out a barren game as the post-split fixtures got underway. We had the balance of play but not enough guile to break through the stubborn home defence.

Stephen Robinson kept faith with his triumphant semi-final eleven and fielded an unchanged team on a pleasant spring day in Dingwall. 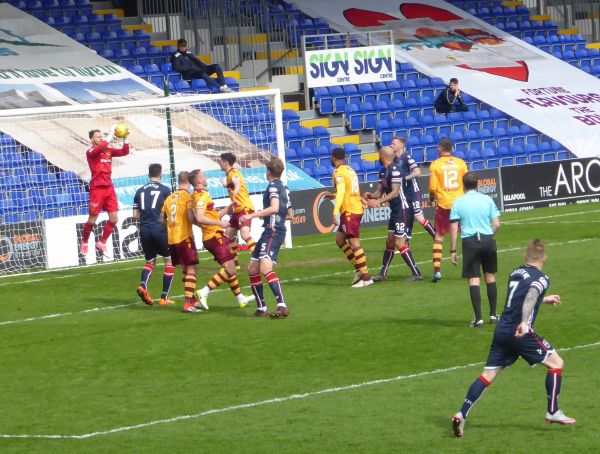 We started well and earned a tasty free kick after a minute.  Main blasted the ball against the wall and Campbell collected and forced Fox to concede a corner with his shot.

Play was delayed for a few minutes when Rose fell awkwardly after a challenge from Gardyne. He recovered but was pulled after five minutes and McHugh was introduced. Routis was a casualty or County and Naismith was his substitute.

The home side grew in confidence and Souttar made the best of his height from a few set pieces to head goalwards but Carson collected. The ‘keeper set up several quick attacks with his speedy distribution.

Tait was active on the left and supplied a couple of crosses but our striking pair had been well marshalled.  Main let fly and hit the side net.  As four added minutes drew to a close Cadden was penalised for pinching five yards and a throw-in was awarded to County.  Seconds later Dunne was putting his body in the way of a goal bound shot to close the half.

Motherwell made the better start to the second period but although we had a fair amount of possession deep in the opposition half scoring opportunities were few.  McHugh had a Cadden corner on target but a headed clearance on the line from Melbourne kept the ball out.  Grimshaw buzzed about the midfield but we seemed to lack the creativity that could cut open the defence.

Bowman came close from 18 yards and Fox parried for a corner.  Main then headed inches wide.

With fifteen remaining Bigirimana replaced Grimshaw as we continued to press.  As County began to throw more resources forward some space began to appear and Main pounced to shoot wide.  Aldred set up Cadden but his curled effort was high.  At the other end Kipre seemed to mop up every threat from the opposition.

James Scott made his debut in added time but the game ended goalless.