No joy for Motherwell as Celtic win

A goal in each half without reply cost Motherwell a 2-0 defeat as Celtic took the points at Fir Park.

A spirited opening spell of fifteen minutes offered some early hope to the home crowd but the game swung the way of the visitors with a breakaway goal and the contest was over after a second half stunner. 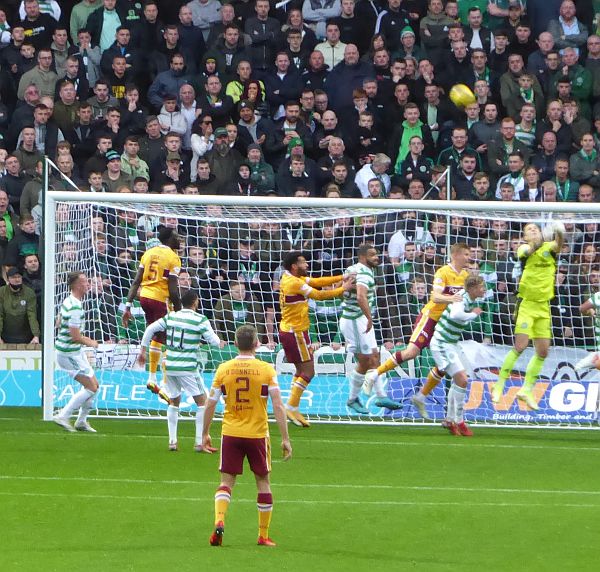 Kevin Van Veen and Mark O’Hara dropped to the bench as Jordan Roberts and Sean Goss were started. Celtic kicked off and Motherwell took the initiative.

The early signs looked good.  Two tempting crosses flashed across the South Stand goal, one from each wing, and Joe Hart was almost robbed as he fumbled with the ball at his feet.

Callum Slattery appeared to be fouled in the centre circle but Willie Collum ignored the shouts.  Tom Rogic then released Jota and he beat Liam Kelly with his low drive from a wide angle.

The impetus was now with the visitors and Motherwell were unable to put any pressure on the visitors’ goal.  Perhaps they might have some luck with another referee?  Collum had to limp off after half an hour and following a five minute turnaround the fourth official took charge.

The second half saw little action at the Cooper end.  Goss send a couple of long range attempts high over the bar and Van Veen might have done better in heading a fine cross from Nathan McGinley.

David Turnbull gave the ‘Well support a reminder of what they miss when he fired an exquisite second Celtic goal high beyond Kelly in 52 minutes.  It was a goal fit to win any game.

Graham Alexander introduced Van Veen then Justin Amaluzor hoping for a late reversal but Celtic were not troubled.  Had the replacement referee been alert enough to spot Boli Bolingoli’s raised arm hit the ball things might have been different but there can be no complaint at the end result.

Motherwell drop to sixth place and have to travel to Tannadice next week.