No shock result for Motherwell in Russia

There was no shock result in Krasnodar and Motherwell's Europa League run has ended at the deserving hands of FC Kuban.  A decent holding display ended with a 1-0 defeat thanks to a McManus own goal.

McCall set the team out in 4-5-1 formation with Anier handed the lone striker job and to his credit he chased, carried and took the brunt of the defence challenges without complaint.  Neilsen was given a first team appearance and showed himself to be real contender for the starting jersey.  He was beaten only by his own centre half.

The usual back four looked solid for the most part though the five midfielders soaked up much pressure. Francis-Angol, Lawson, Lasley, Carswell and Kerr were charged with stifling the opposition. Francis-Angol found much more space that in the first leg and his rare runs into the Kuban half were the only attacking outlet we saw in the first half. 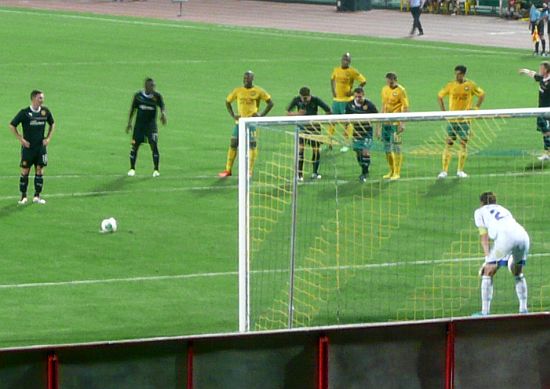 Neilsen had only one save to make in the first period though the home team spurned a couple of golden chances early on.  Tsorayev and Sosmin should have done better but the fifty Motherwell fans behind Neilsen’s goal were delighted to see the attempts fly wide.

We conceded five minutes into the second half when the unfortunate McManus headed into his own net.  That spurred us into a more aggressive period and Anier raced on to a ball on the right wing before attempting to find Kerr on the charge inside the box.

Lawson and Anier were replaced by Cummins and McHugh with twenty minutes remaining and the fun with penalities ensued.  Hutchinson fouled Balde and Neilsen saved Kabore’s spot kick.  We earnedour shot on target when Hammel’s free kick into the box was handled.  In added time McHugh had the chance to break our long European goal drought but his weak effort was easily saved by Belenov.

The 3-0 aggregate fairly reflected the gap in quality between the teams and our reward is to fight another long league season to earn another shot in Europe next year!