No winner at Pittodrie

A last gasp equaliser robbed Motherwell of a place in the fifth round of the cup.  Murphy's fine strike had given a late lead but McGinn forced a replay at Fir Park on Tuesday 11 December.

We made three changes from the side that enjoyed a midweek win against Dundee United; Hollis, Kerr and Hammell started with Randolph, Hutchinson and Francis-Angol making way.

Aberdeen almost overwhelmed us in the first few minutes as they piled pressure on Hollis’ goal.  Kerr’s nervous clearance conceded a corner and Fallon then produced a point blank header that the ‘keeper did well to parry.  It looked as though our hosts were under instructions to test Hollis at every opportunity  and long range shots peppered our goal.  In fairness, our man looked confident although one attempt seemed to bounce awkwardly and caused another fine reaction save. 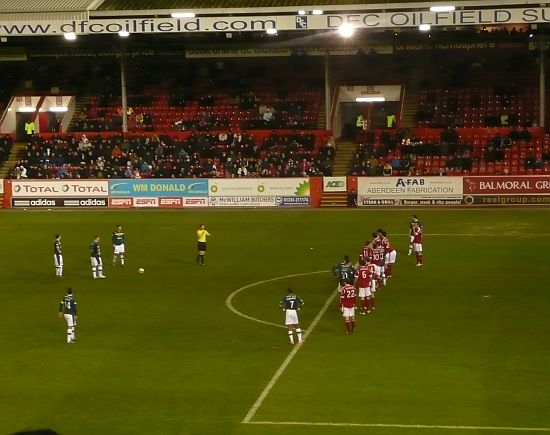 Our only real chance in the first half came when Humphrey, emboldened by his triumph at Tannadice, tried another 25 yard effort than Langfield was happy to tip over the bar.  We reached the safety of the dressing room happy to be level but we were to make a better showing in the second period.

There was not much in the way of silky football on show to warm the 6,600 freezing spectators. Nevertheless we were seen much more as an attacking force.  Law sent over a teasing low cross, Hateley tried his luck with a 25 yard free kick and Lasley had a drive just wide.

Murphy brightened up the afternoon when he scored with ten minutes remaining.  His trademark move from the left wing saw him cut inside and from a central position outside the box he let fly an unstoppable shot that had the travelling support in raptures.

It looked like the win was secure but Aberdeen got the lifeline when Considine threw in a cross and McGinn glanced a header beyond Hollis and in at the far post.

At least we’ll be in the hat for Monday’s draw but we’ll have a replay to win a week come Tuesday.