One goal at Ibrox not enough for Motherwell

Three goals late in the game ended Motherwell’s hope as Callum Lang’s early strike was overturned. It ended 3-1 to Rangers.

For more than an hour Motherwell held off incessant attacks as Rangers piled forward in search of an equaliser.  The defending was heroic at times but the fairytale ended with the loss of three in the last twenty minutes. 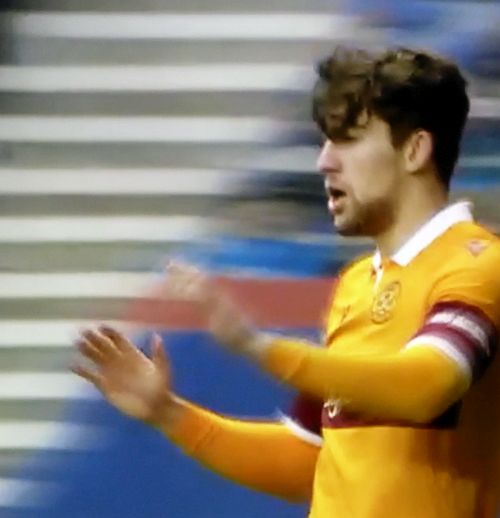 There were two changes to the Motherwell team.  Ricki Lamie and Robbie Crawford joined the starting eleven as Christopher Long and Barry Maguire dropped out.

Crawford kicked off with Motherwell facing the Copland Stand and there was not long to wait for goalmouth action.  Jermaine Defoe tested Jordan Archer after 2 minutes but the first goal arrived a few minutes later at the other end.

Stephen O'Donnell powered a gem of a cross low across the six yard line to find Callum Lang on the charge.  His first touch beat McGregor and Motherwell had an early lead. The opener was the first conceded at Ibrox by Rangers in the league this season.

It was no surprise that the rest of the contest was dominated by Rangers pressure on the Motherwell goal.  When possession was conceded all ten in claret and amber would pour back into defence. They were content to start resistance in the final third. Clearances were often collected by McGregor, all alone in his half of the pitch.

Half-time was reached with the lead intact.  Archer had a few routine saves to make and the main threat was restricted to free-kicks from 20 yards.

The pattern was unchanged in the second period.  The statistics suggest that Rangers had 84% possession and it must have felt like that to every Motherwell player.  They packed their box and rebuffed wave after wave of blue shirted opponents but the first crack appeared in the 72nd minute.

The ball fell to Kemar Roofe following a cross and knock down.  Frome close range he lifted the ball high into the net.

The game swung in favour of the home side after a further ten minutes when Cedric Itten floated a header beyond Archer.

Motherwell responded with a triple substitution and pushed forward.  McGregor was forced to wake up from his earlier slumbers.

Roofe added a third in the fourth minute of added time to give the gloss of a comfortable victory.