One goal separates Motherwell and Celtic

Motherwell lost at Parkhead to a goal in first half added time.  The narrow margin hardly represented the balance of play.

Had Motherwell reached the break without the late loss there might have been a more spirited fight in the second period.  We were fortunate not to concede more. 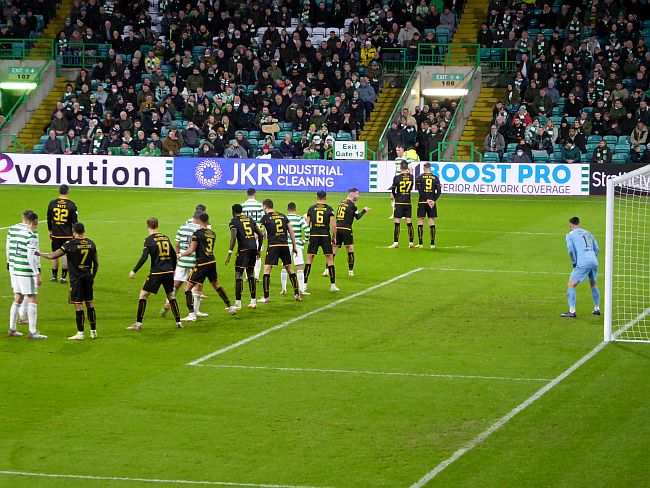 Grahan Alexander made a couple of changes; Barry Maguire replaced Dean Cornelius in midfield and with Ricki Lamie injured Jake Carroll partnered Bevis Mugabi in the centre of defence.

It was hardly a surprise to see that Liam Kelly soon had to display his skills and after five minutes he somehow managed to deflect a point blanck effort from Forrest beyond the post.  The forward picked up an injury and Mikey Johnstone came on after 15 minutes.

Callum Slattery reminded the hosts that they were in a contest with a long range shot that rattled the bar.  Joe Hart had his turn to shine when he blocked two quickfire attempts following a long throw from Stephen O’Donnell.

Kelly produced another excellent save when David Turnbull’s powerful shot was defected on its way to goal.  With his weight now on the wrong side he still managed to throw out a hopeful left arm to keep his goal intact.

Two minutes into added time at the end of the half we conceded.  Slattery was booked for a foul between the area and the sideline, Turnbull passed the dead ball to the unmarked Rogic in the ‘D’ and the ball was slammed beyond Kelly.

It was a tough end to the opening half as Alexander’s team had competed and carried a threat.

If the first spell gave the travelling fans some hope it soon faded as the team in the black away strip failed to spark.  All the goalmouth action took place around Kelly and there was no meaningful flow in the other direction.

With fifteen minutes remaining and Motherwell, remarkably, still in the game, the manager introduced Shields and Donnelly.  There was a little more play in the Celtic half but it never amounted to much as the home team comfortably controlled the closing minutes.

Motherwell drop a place and now lie in fifth place on goal difference.