One point a fair reward

Tanner stroked home from the spot in the 61st minute to cap a fine individual performance after Dundee's Paul McGowan broke the deadlock with a marvellous strike early in the second half. 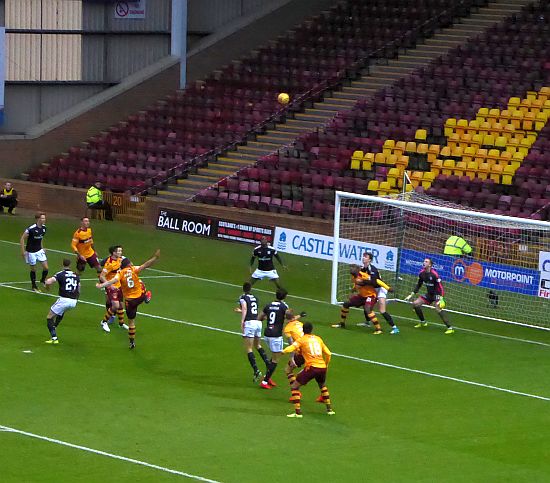 But the story of the game was Elliot Frear picking up a late injury to leave Motherwell a man short for the last 13 minutes after all three substitutes had been made. Chris Cadden had already gone off injured and though Peter Hartley and Trevor Carson also required late treatment, we somehow held on.

Dundee had the better of what few half chances there were in a mediocre first period with Moussa sending a header off the bar, though Carson seemed to have it covered.

Liam Grimshaw shanked wide just before the break with our clearest sight of goal in a windy opening 45.

Straight after the restart Dundee broke well and McGowan - seemingly making the wrong choice to shoot when attacking two on one - lashed the ball high into the net from outside the box.

And McGowan provided a second moment of quality soon after with a delightful chip which beat Carson only to hit the woodwork.

We rallied and Grimshaw fired straight at the keeper after bulldozing through the defence. It was his last action of the game as Stephen Robinson committed early with George Newell and Frear replacing him and the ineffective Ryan Bowman.

Moments later Cadden, who had not looked fit all match, pulled up and was replaced by Andy Rose to leave us with no subs remaining for the last 35 minutes.

We were unexpectedly rewarded just after the hour when Mark O'Hara was blindsided by Cedric Kipré at a set piece.  Our man nicked the ball, O'Hara nicked him and the referee pointed to the spot for a correct, if needless, penalty.

With Louis Moult ending his Motherwell career injured, it was Tanner who took responsibility with a cool finish. His tail was up as he pinged a free kick on target during our brief spell looking for a winner.

Later he was named man of the match for his twinkle-toed twisting and turning which provided our only goal threat, even if the final product was not always there.

Dundee settled and were aided by introducing Scott Allan as we grew stretched. He sashayed through his cameo as the best player on the pitch and, not for the first time, it must be wondered just why he is at Dens Park at this stage of his career - on the bench, at that.

His free kick found a header glanced onto the post to be scrambled clear and another fine potential assist was flicked just wide.

Hartley pulled up to have home fans' hearts in mouths and Carson received treatment for his shoulder. The physios are likely to be working over Christmas in view of Wednesday's trip to Ibrox.

An agonising four minutes was signalled and Carson made one last stunning save on a header, conveniently placed to his good side, to earn us a point full of grit and determination.