Meldrum held his starting place and Donnelly got another game under his belt as he replaced the luckless McLean.Reynolds shared the central defensive duties with Craigan

The home side should have taken the lead after twenty minutes when the speedy Weatherston raced paced Reynolds and along the dead ball line to deliver a tempting ball across the face of the goal.It seemed certain that the onrushing Canning would score but the keeper, aided by a couple of defenders blocked his effort as the formed a heap of bodies on the line.The resulting corner caused another stramash in the six yard box but the danger was cleared and with it went the Spiders' chances.

Minutes later Foran raced on to a through ball from Kerr and slid his attempt into the net.Lasley missed a great chance following an impressive passing movement which ended with a one-two as the midfielder charged into the box. 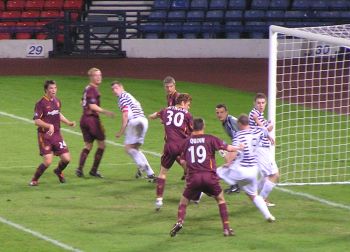 Foran's domination of the game was complete within five minutes of the restart.His second came moments after he outpaced the defence to poke a shot against the outside of the post.He headed against the bar and eventually collected the scraps to fire into the roof of the net.

McDonald was tumbled inside the box and Foran made no mistake with the spot kick.The game was won with forty minutes remaining.McDonald became increasingly frustrated as he kept failing to join his team mate on the scoresheet.He could have had a couple if his finishing had been at all efficient.

Foran , McDonald and Lasley were replaced by Elliot, McCormack and McBride as the game progressed and each received generous applause from the travelling fans.It was no surprise to hear that the sponsors' Man of the Match was the hat trick hero.

Paterson deserves a mention for his contribution from the wing and Reynolds and Donnelly will have learned lots from the experience of playing on the wide open spaces at Hampden.A win in the next round will produce a return to the national Stadium – fingers crossed for the draw (on Saturday evening).