Motherwell crashed out of Conference League with a 2-0 defeat in Sligo.  It was a horrible, pathetic display that will ring the alarm bells for the new season.

Sligo deserved their 3-0 aggregate win and earned a trip to Norway next week to play Viking.  The Motherwell support had made their concerns abundantly clear after last week's defeat and those feelings will increase after this debacle.

Much criticism will be aimed at the manager (rightly so) but the players must accept that they let everyone down.  After the match Graham Alexander sad that the players were "a little bit naive", some understatement. 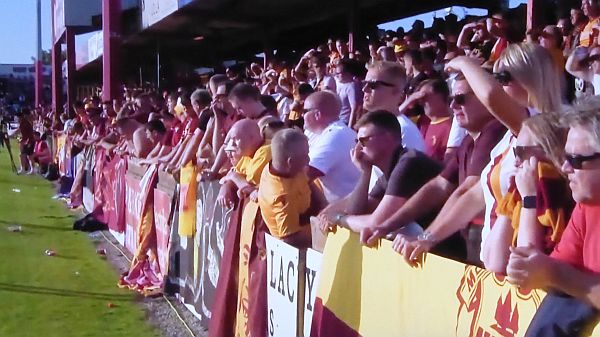 A tough watch for these fans

There was only one change from last week's opening at Fir Park as Ross Tierney was preferred to Connor Shields for the visitors.  Sligo fielded an unchanged eleven.

The home side got a dream opening.  Motherwell conceded a free kick almost thirty yards out on the right of centre when Bevis Mugabi was harshly judged to have impeded Keena.  Shane Blaney stepped up to deliver a beauty that curved and flew beyond the outstretched flailing arm of Liam Kelly to find the postage stamp corner.

The expected reaction from Motherwell was toothless. The fact that McNicholas was able to enjoy his half time break without having to make a serious save tells revealed the paucity of the 'Well attack.

Blair Spittal found targets with a couple of crosses.  Ricki Lamie bundled that ball into the net but the assistants flag muted the reaction, Kevin Van Veen headed into the 'keeper's arms  but there was little to encourage the 300 travelling fans.

Connor Shields replaced Spittal at the break but there was no change in the pattern.  Motherwell were unable to build any coherent attacking plays.  The visitors had plenty of possession but seemed to have no idea what to do with the ball.  Misplaced passes, ineffective crosses and off target punts played to the red shirted defenders' strengths.

With 20 minutes remaining the manager made three substitutions.  The ineffective play continued.  As time wore on the inevitability of the final outcome became more clear.  Feint hope of a late miracle disappeared and to top off a cracking night for Sligo Mata ran through with Ojala in his wake and sealed the game with a low drive to Kelly's right.

The European tour for 2022 was a short lived misadventure that must weaken the already shoogly nail on with the manager's jacket hangs.