Motherwell were brushed aside by Hearts at Tynecastle and can have no complaints after a 2-0 loss.

The game was over well before half time as goals were conceded to an early penalty and a 22 minute free kick.  Motherwell competed more in the second period but their few goal attempts were unsuccessful.  Liam Kelly will not be keen to watch the re-run. 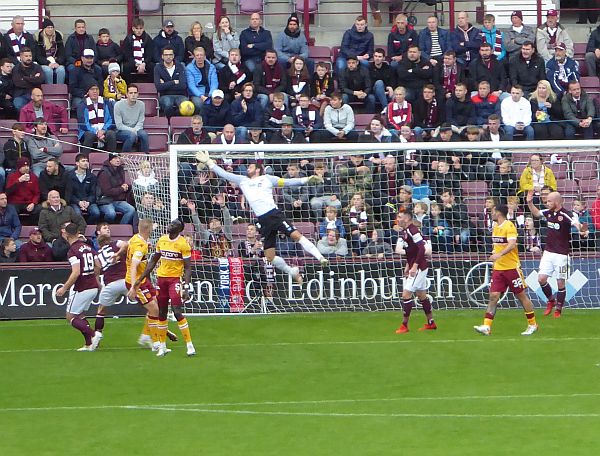 Bevis Mugabie replaced Ricki Lamie in the starting eleven and Motherwell got the game underway with Kelly in front of the travelling support.

With only three minutes on the clock Liam Boyce chased a hopeful ball into the ‘Well area.  Kelly came to his left to cover the run and, a yard from the dead ball line, his outstretched leg gave the striker the opportunity to tumble.  The referee hesitated but pointed to the spot and Boyce made no mistake.

Hearts dominated proceedings thereafter and Motherwell could hardly get a touch of the ball.

Midway through the half Ojala conceded a free kick in a central position 25 yards from goal.  Kingsley stepped up, shot, and Kelly failed to save on his right.  Tony Watt had hardly touched the ball yet he came close with a fine dipping volley that had Gordon at full reach to concede a corner.  Mugabi headed it on target but the save ended the half.  At the break the home side were two up and comfortable.

Heavy rain arrived at the resumption but the game kept flowing toward the Motherwell goal.  Devlin fell under a challenge from Slattery and the home side were awarded a second penalty.  On this occasion Kelly saved Boyce’s kick.  Play immediately swung to the other end where Kaiyne Woolery faced Gordon.  The half paced shot was saved.

Boosted by the reprieve Motherwell pick up the pace and enjoyed their best spell of the match but without reward.  Amaluzor and then Shields replaced Grimshaw and Van Veen but the home side saw the game out with ease.

The loss is only Motherwell’s second league defeat of the season and they now have a fortnight to prepare for the arrival of Celtic at Fir Park.