Motherwell missed the chance to make a statement of intent with a poor performance against Aberdeen at Fir Park.   There can be no complaint at the 3-0 defeat as the visitors grew in confidence with every passing minute.

The game was sealed by the fifteenth minute.  James Scott had failed to score from the penalty spot and then, with Peter Hartley off the park, we lost the opener.  After that Motherwell looked aimless and without hope. 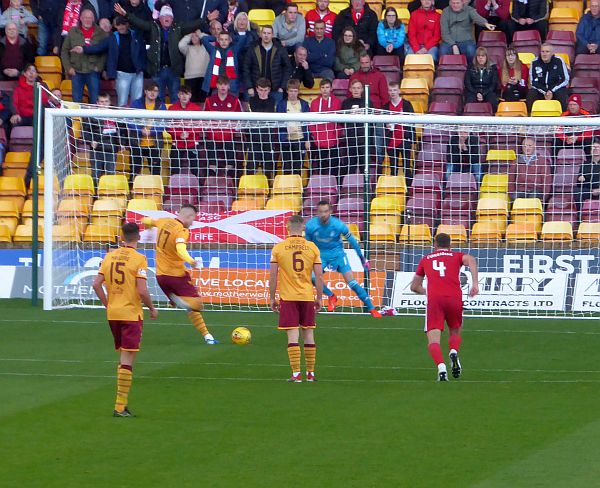 Scott has a chance to score

Devante Cole was benched as Chris Long started the game up front.  We kicked off and looked good in the opening exchanges.  Long was upended by Joe Lewis and we had an early chance to take charge.  James Scott’s effort was saved by an outstretched hand and the visitors took heart.

Derek McInness had set his charges up in a defensive formation and they seemed content to take their chance on the break.  The tactic delivered when Motherwell were a man short.  Peter Hartley had to leave the field after recovering from a head knock but before Bevis Mugabe could be readied we conceded.

Barry Maguire seemed flat footed and allowed Andrew Considine to run in of goal.  The striker delivered a well placed lob over Mark Gillespie to set the Dons on their way.  He had another opportunity on the half hour.

Liam Polworth blasted a 22 yard free kick over the bar as we pursued an equaliser but we were fortunate not to lose a second as half time approached.  Richard Tait had to be alert to clear from his goal line.

Allan Campbell will avoid sight of Aberdeen’s second goal.  Our man dithered 30 yards from goal and Niall McGinn robbed him.  Another lob over Gillespie lifted the 1,000 in the South Stand to their feet.

Motherwell were unable to find a way through the red defence and were forced to make unproductive square passes along the halfway line.

Aberdeen’s third was the best of the match.  Zak Vyner lashed a fine effort from 25 yards low beyond Gillespie.

There remained another 30 minutes for Motherwell to stage a storming resurrection but despite the efforts of Jermaine Hylton and Devante Cole from the bench we hardly threatened Lewis’ goal.

We remain third by a point but a more spirited showing will be needed next week at Ibrox.