Motherwell gifted Ross County a 1-0 win at Fir Park thanks to a needless penalty and an error strewn performance.

It was an awful spectacle between two poor teams.  The visitors were no doubt grateful for the penalty and they stood strong  when tested by the occasional threats that Motherwell were able to muster. 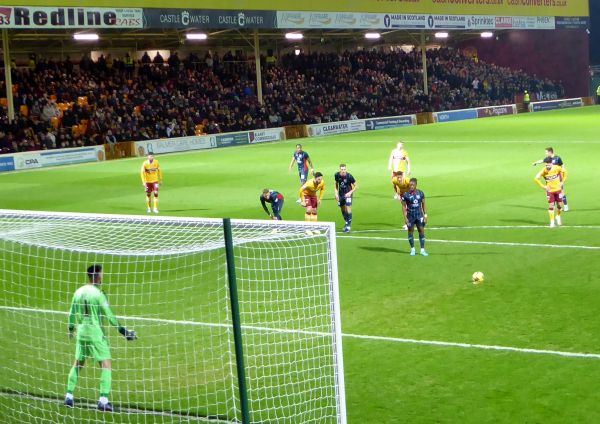 After an opening 15 minutes when Motherwell made most of the running, Ross County were presented with what turned out to be a chance for the winning goal.  Jake Carroll was beaten for pace by Kayne Ramsay and he attemped to compensate with an outstretched arm as his opponent crossed the threshold of the penalty box.  John Beaton pointed to the spot and Joseph Hungbo beat Liam Kelly.

What followed was a half hour of non-football.  Neither ‘keeper was troubled as the ball flew high and long.  Occasional flashes of inspiration came from Kaiyne Woolery but none of his team-mates could respond.

Van Veen did well in the first minute of the second period to force his way to the dead ball line.  His low cut back found Shields on the six yard line but his attempt missed the target.

Changes were needed and the first was the substitution of Shields with Efford.  Woolery remained the man most likely to spark a comeback and his run and shot just after the hour was stopped by Laidlaw’s leg.

Jordan Roberts replaced Sean Goss and Solholm left as Callum Slattery joined the contest but much huffing and puffing was undone by slack possession and misplaced passes.

Van Veen had a corner off target and in the last minute Roberts produced a fine header from close range but the ‘keeper made the save that to ensure the three points.

It was a hugely disappointing showing from Motherwell.  The manager, in his match preview, had made it clear that a 5% dip in performance could cost the game.   The dip was far greater and a huge improvement will be needed against struggling Dundee at the weekend.