"That victory is for Billy Davies" was John Philliben's reaction after the match. There's no doubt that this was the best display of the season by the Mighty 'Well and a fitting tribute to the ex-manager.

Mio and Softie made a few alterations to the team line up. Strong and Martinez were out and Twaddle and Dow started on the bench. Youth returned to the team again with Pearson, Lasley and Nicholas starting in the middle of the park while Connolly and Elliott also contributed to lower the average age of the team. 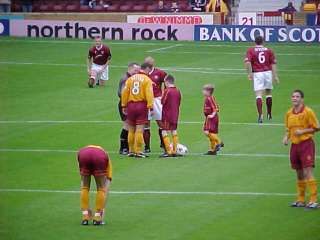 Can we have these mascots again please?

For once we looked like the team which 'wanted it' most. Right from the kick off we charged at them. Attacking the South Stand goal we almost scored in the first two minutes. Pearson chipped across the six yard box to Nicholas, who returned the pass to Kelly and it looked like he had a tap in. But Niemi made a great stop.

The rest of the half had a similar pattern. We surged forward at every opportunity and bagan to spray a few telling passes around. As the first forty five began to close there were some concerns that we had not yet scored and that there could be a price to pay later on. However we got our just reward five minutes before the break. 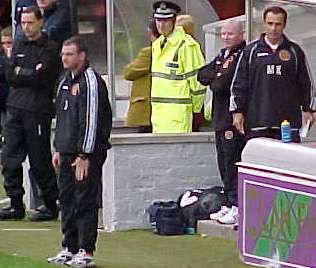 The new team in the dugout

A fine series of passes between Nicholas, Kelly and Pearson finished with Pearo sending a though pass to Kelly who the shot from the left edge of the penalty box. Enthusiastic celebrations followed.

The fluency demonstrated was partly due to the poor form which Hearts currently suffer but also reflects the spirit and enthusiasm shown by our starting eleven. All played well but mention has to be made of Lasley in midfield, Nicholas in his natural wide position and the tireless running of Elliott and Kelly.

The central defensive pairing of Forrest and Ready was rarely troubled and at one stage Ready was given a round of applause for some skillful defensive work!

The second have was not so good in terms of the football on display though the last twenty minutes produced some exciting moments. Mark Brown produced a couple of goal stopping saves and Stuart Elliott contributed the second goal on the hour mark.

Elliott had a free header from around ten yards and he directed the ball to Niemi's feet. Everyone in the ground (including Elliott) expected the goalie to collect the ball after the bounce but he missed it. Either a bad bounce or lack of concentration, but that didn't matter to the home crowd who at last could see a home victory on the way.

It has been a long time coming but at last we have the first win of the season. Our points tally has doubled at a stroke and everything looks a bit brighter. The next SPL game against St Johnstone could let us pull further away from the bottom of the table. Let's hope for another similar performance at Perth.