Robinson's plan pays off at Ibrox

Motherwell took a point at Ibrox and came very close to taking three. Moult's early opener was cancelled by Garner's second half equaliser but with both 'keepers in form the game finished 1-1.

The 'Well players earned a standing ovation from their fans after the full time whistle. It was proper recognition of the fine fighting performance of all 14 players who gave their all. 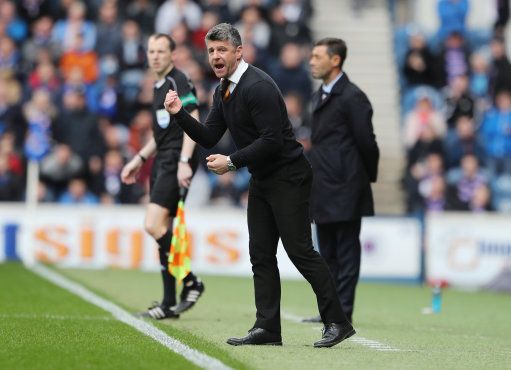 We started with a surprise. A back three of Hammell, McHugh and Heneghan were supported by Frear and Cadden as auxiliary full backs. There was no thought of hanging back to repulse waves of attacks from the home side and we pushed forward right from McDonald's kick off.

With two minutes on the clock Frear pushed down the left wing to win a corner. Moult rose unmarked to head the kick into the net and give us the perfect start. For the third time this season we had the lead at Ibrox.

For much of the rest of the first half we pushed Rangers back but our pressure failed to deliver. Moult and McDonald had attempts off target and Frear and Cadden continued to harass. Samson had only one save to make before the break and Waghorn was booked for a blatant dive.

Such was our domination that Rangers made three changes as the second period got underway. Only one of the starting back four remained. The bold move tilted the game against us in the early part of the half and we had to defend a number of corners.

Hyndman missed a sitter before we replaced Clay with Lasley on 50 minutes. Our greying caption had a hance for a spectacular from the endge of the box but he blasted high and wide.

Garner somehow got on the end of a Miller cross on the hour to level the score but within a minute we had the ball in their net only to have it rulled offside.

Foderingham pulled off a fine double save from Moult then McDonald. At the other end Samson was busy and the birthdy boy can be pleased with his contribution. Cadden's low cross almost found Bowman on the slide at the six yard line and a McDonald free kick rippled the roof of the net but we couldn't grab the winner.

The manager should be delighted with the way the team carried out his positive strategy and the valuable point keeps our position in the table. Wednesday's clash with Hamilton should be a cracker.