Santa is a 'Well fan

Motherwell ran out with a comfortable 2-0 win over a poor St Johnstone team on a chilly winter afternoon at Fir Park.

Goals from Dean Cornelius and Kevin Van Veen, one in each half, sealed the win for ‘Well and the toothless opposition hardly raised a threat against Liam Kelly in reply. 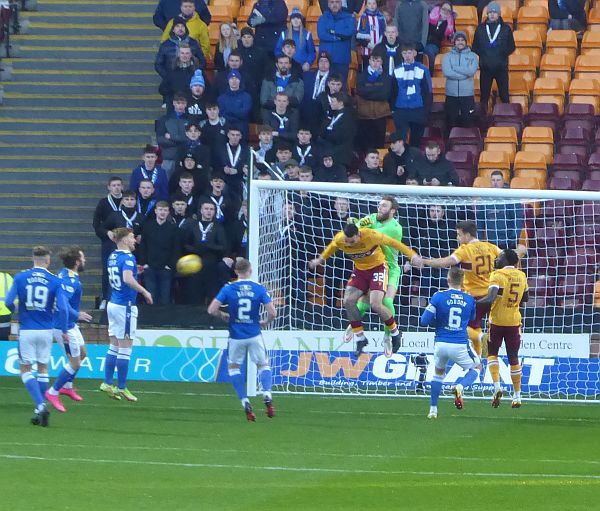 It was not a great footballing spectacle but none of the Fir Park faithful will complain as another three points were added to Motherwell’s total.

Sondre Solholm returned to duty and displayed the defensive skills that made clear why the club presented him with a contract that extends till 2024.  His command in the air and his ability to make telling challenges gave the home team dominance at the back.  His partnership with Bevis Mugabi is solid.

After fruitless early exchanges an inspired low drive from Cornelius, making his first home league start, opened the scoring.  The midfielder landed on a defensive headed clearance just outside the box and placed his shot to the ‘keeper’s right hand corner.  The goal was just the tonic needed to brighten the cold afternoon.

In truth there was little to report as far as goalmouth action was concerned.  The game moved from one side of the halfway line to the other with neither side dominating.

Van Veen ended the contest ten minutes into the second period when he ran on to a ball over the top from Solholm.  Quick footwork eluded a couple of defenders and a well placed shot from a wide angle beat the outstretched arm of Zander Clark.

The two goal lead was never in doubt and Graham Alexander was able to make three routine substitutions to close up shop.