Motherwell suffered their biggest home defeat of the season when St Johnstone handed out a 5-1 drubbing.  We were three down at the break and never looked like recovering.

There was no hint of the impending collapse after the opening 30 minutes.  If anything a nil-nil draw looked favourite as neither team has shown any rhythm or goal threat.  We managed to concede three in ten minutes to put the game beyond reach.  Bigirimana got our consolation goal. 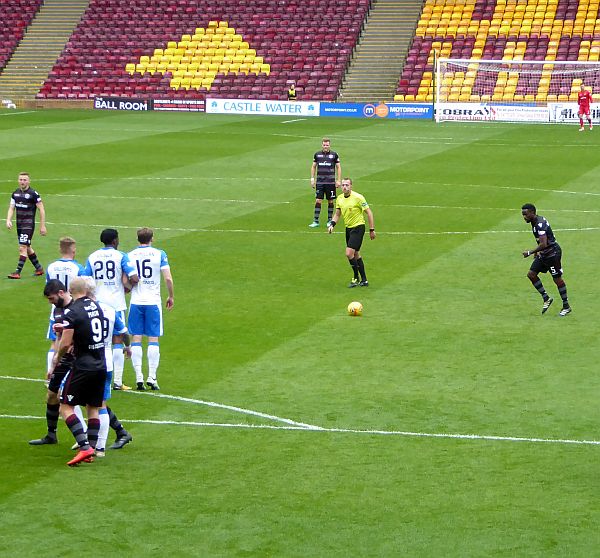 Bigi sends this into the Cooper Stand

It was a much altered Motherwell team that lined up in the away strip as St Johnstone got the game underway.  Without Tait, Bowman and Kipré in the staring eleven we had to accommodate changes from back to front.  Maguire, Frear and Ciftci filled the gaps.  The replacements did not impress but they were not alone as the team delivered an untypical low key performance.

After that initial unremarkable first half hour the home support thought that some progress was underway as we peppered the South Stand box with three quick corners.  The visitors were untroubled and from the last they mustered an attack.  Foster arrived at the dead ball line with time to look up and pick out MacLean at the far post.  His cross was perfect and the striker placed his header beyond Carson for the first of his hat-trick.

Five minutes later Maguire did not offer enough resistance as Davidson rose to head at the angle of the six yard box.  Carson did well t keep the ball out but it fell to Anderson who lashed he ball into the net from close range.

Our first half collapse was complete when MacLean slid in to convert a tempting low cross from Willock.

Bowman and Bigirimana appeared as the second half got underway with McHugh and Grimshaw afforded the chance of an early shower.  But the change hardly made any difference.  St Johnstone gave us early warning of their intent when Wotherspoon’s shot whistled by the post in 47 minutes.

Ciftci was unable to react when the ball flew at him three yards from the goal line then MacLean got a touch to Wotherspoon’s shot to make the margin four.

Petravicius replaced Frear as we tried to stem the flood.  Bigirimana got the consolation before McMillan ended the rout after heading home Foster’s deep cross.

At three o’clock we had a three point advantage over the Perth Saints but now only a slim goal difference keeps us in seventh place.  We have some work to to if we are to be best of the rest.