Motherwell extended their poor run with a 2-0 defeat at Pittodrie and a fifth red card of the season.

Referee Craig Napier made the crucial decision of the game three minutes into the second half.  Motherwell were already a goal down when Liam Polworth was dismissed, presumably for the use of abusive language.  It ended the contest and Aberdeen eventually doubled their lead despite some heroic goalkeeping from Liam Kelly. 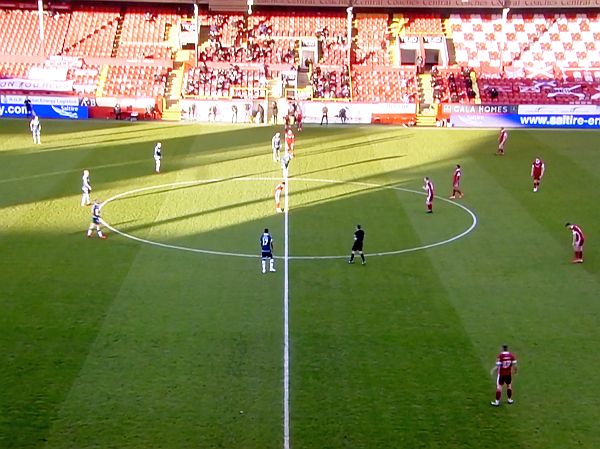 The sun was not shining for Motherwell

It was not a surprise to see that Graham Alexander sent an unchanged eleven out in the blue away strip and they faced the beach end as Aberdeen kicked off.

The home side had the better of the opening exchanges and they took the lead after fifteen minutes. Tommy Hoban rose above the defence to head into the net.  The delivery came from a free kick wide on the right and the yards stolen by Matt Kennedy aided the cross.

The first half was tousy at times.  Declan Gallagher was booked after five minutes and later Liam Polworth, Scott Wright and Funso Ojo were shown yellow after a pile up in the centre of the pitch.

Tony Watt came very close to levelling the game.  After an interception and twenty yard run he drove low and struck the post with Joe Lewis beaten.

The second half started with Chris Long in place of Sherwin Seedorf but a huge blow arrived in 48 minutes when Polworth was given a straight red card following a tangle with Lewis Ferguson.

The manager reacted by giving Harry Smith a debut as Watt made way.

Liam Kelly then produced a string of fabulous saves to keep us in the game but he was given no chance to prevent the second that arrived with 15 minutes remaining.  Aberdeen had had a succession of short corners and Motherwell's failure to notice led to Considine having an easy finish.

Smith had a couple of opportunities to demonstrate the qualities that attracted him to Fir Park and a chipped cross to Devante Cole produced a header easily taken by Lewis.

Alexander made full use of his substitutes to freshen the team but all the traffic was to the Motherwell goal and in the end we were fortunate not to lose by a bigger margin.

Motherwell have a chance to earn a first win in fourteen outings when they travel to Dingwall on Wednesday.