Motherwell lose the Scottish Cup quarter-final tie and Hibs progress with a 2-1 win at Fir Park.  The dismissal of Bevis Mugabi in the first minute was a major factor.

The visitors made the best of their early advantage following Willie Collum’s decision to send Mugabi off after a lunging tackle on Josh Doig.  They were two up ten minutes before the break but a goal from Joe Efford offered hope to the home stands.  Despite a valiant effort in the second half Motherwell failed to equalise.

On this occasion Graham Alexander made four changes to his opening line-up.   Jordan Roberts, Dean Cornelius, Nathan McGinley and Bevis Mugabi were introduced into what turned into a frantic opening to the game.

On review the dismissal of Mugabi looks to be harsh and it forced a restructure.  Motherwell switched to 4-2-3 shape and pressed forward.  Roberts may think himself fortunate to have received only a yellow card for his foul on Drey Wright in seven minutes before Elias Melkersen straight armed Ricki Lamie for the third card of the match.  It was shaping up to be a blood and thunder affair.

The opening goal followed a pair of corners for Motherwell that had caused some panic in front of Macey’s goal but play swept to the South stand end where Sylvester Jasper managed to deliver a cross that was glanced into the net by Melkersen. 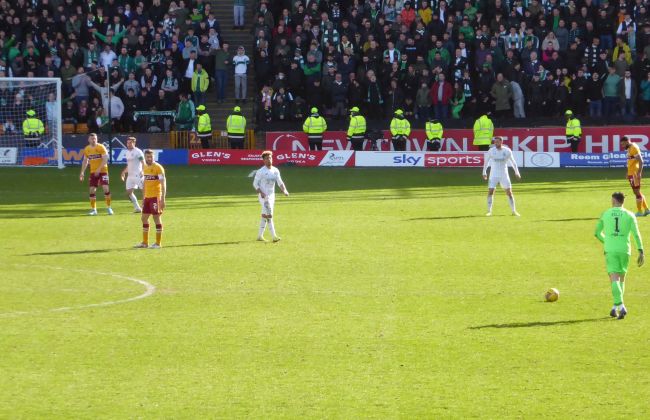 A last throw of the dice

The second followed more ‘Well pressure but the young Norwegian was in  place to control a long ball and he ran on to beat Liam Kelly.  With a two goal lead and an extra man the tie should have been over but credit is due to the Motherwell ten for the effort they put into the game.

Just before the break slack defending allowed Roberts a hit well wide of the target but Efford  took the chance and directed the ball goalward off his chest.  It sneaked in at Macey’s right hand post.

Stephen O’Donnell replaced Ojali at the break and Motherwell stuck to the task of breaking down a less than convincing Hibs defence.

Liam Donnelly and Cornelius covered miles in midfield and Donnelly popped a low drive wide of the post on the hour.  Kelly was hardly involved in the second period as most of the action was in the visitors’ half.

O’Donnell worked his way to the dead ball line and whipped a tempter across the six yard box but there were no takers.  Kaiyne Woolerycame on for the final ten minutes and soon had a chance but with a clear sight of goal he missed the target.

The large travelling support had been subdued for most of the second period but as the referee ended the game they were able to cheer their team into the semi-final.  For Motherwell all that remains is a bash at top six glory and that starts at McDiarmid Park next weekend.-