Tom Aldred the hero as 'Well win the derby

Motherwell earned a massive win in Hamilton to enter the winter break seven points ahead of their Lanarkshire neighbours.  Tom Aldred was the double goal scoring hero as we came back for a goal down to take the points with a 2-1 victory.

After an even first half we bossed proceedings in the second.  Elliott Frear can be proud of his contribution on the flank while Campbell and Grimshaw chased everything in the middle of the park.  Andy Rose made a excellent contribution on his farewell appearance.  We had a huge support and they will enjoy a more hopeful and Happy New Year boosted by this important win. 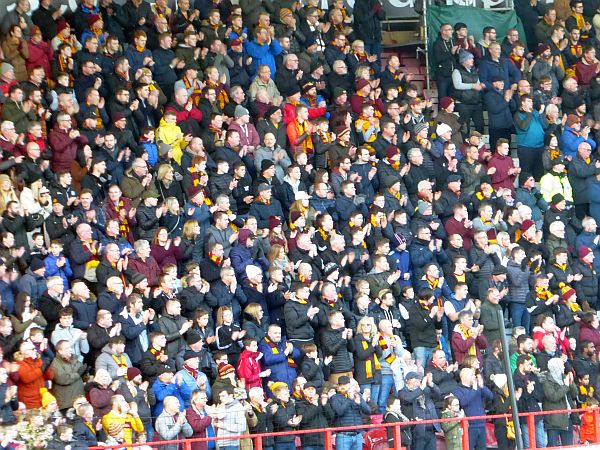 A much changed Motherwell side lined up with four changes from the carnage of the midweek loss to Kilmarnock.  There was a welcome return for Peter Hartley together with a place for Connor Sammon, a final appearance in claret and amber for Andy Rose and Liam Grimshaw.  Sidelined were Carl McHugh, Curtis Main, Charles Dunne and Alex Rodriguez-Gorrin.

Danny Johnson had a couple of early shots but the first entertainment for the Motherwell support that packed the stand behind Gilespie came when Dougie Imrie and Steven Boyd collided in spectacular fashion to end a promising attacking move.    That was followed by a prolonged tribute in the 10th minute on the eleventh anniversary of the passing of Phil O’Donnell.

Goal action came next.  First, Dougie Imrie latched on to a ball over the top of the defence.  He was celebrating before the ball ran into the net.  The home crowd were silenced five minutes later when Frear’s corner offered Tom Aldred the chance to fire  the ball high into Gary Woods’ goal.

Tait limped off the park following a brutal and unpunished tackle by Lenny Sowah to be replaced by David Turnbull ten minutes ahead of the break.

Turnbull managed to earn a booking early in the second period for persistent fouling before Taylor-Sinclair was replaced by Adam Livingstone.  The stand-in left back looked comfortable and he looks like a likely inheritor of the position. Attacks on the home goal continued but stout defence defied.

We had the better of the play with Frear delivering a series of tempting crossed balls from the left wing.  Motherwell’s pressure on the home goal continued and it was no surprise when the second goal arrived though but there were no bets on the scorer.  Turnbull delivered a free kick from thirty yards out.  The ball was not cleared and it fell to Aldred’s left foot.  He slammed it high into the net and the crowd erupted.

Great joy was unleashed as the final whistle arrived and players and fans milked the moment.  The prospect of a winter break with a win in the pocket seems like a very pleasant prospect.