Motherwell earned a hard fought point at Easter Road thanks to a second half equaliser from Tony Watt.

Having spurned a half dozen chances in the first half Motherwell fell behind to a goal that Hibs hardly deserved.  Despite the loss the visitors stuck to their task and the reward came with a Watt shot off the post.

Dean Cornelius can be pleased with his first league start as he replaced the suspended Barry Maguire.  Sol Johansen failed to make the staring line and Stephen O’Donnell resumed his left back duties. 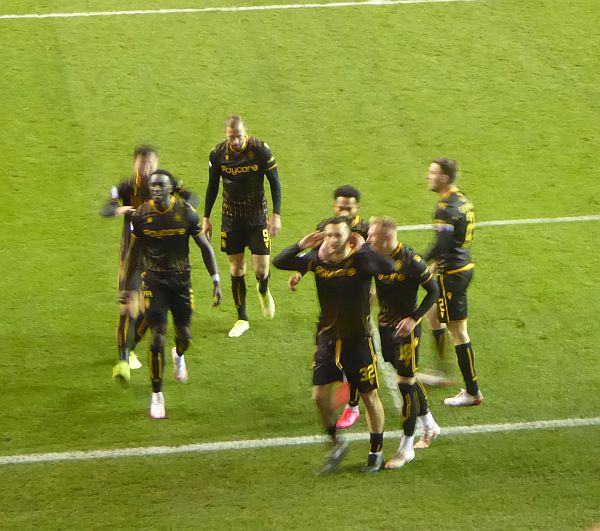 The teams teased each other without testing the ‘keepers but Motherwell gained the initiative and pressed Macey’s goal.  The groans in the away stand grew as chance after chance was missed.

Cornelius was clean through but his shot hit Macey’s legs.  Watt had a couple of shots and a header, all good chances.  Kevin Van Veen created an opportunity as he skinned his marker wide on the left of the penalty area.  Macey was stranded but KVV’s narrow angled attempt missed the target.

The price paid for the blunt striking came after half an hour when Nisbett connected first time with Campbell’s cross to drive high into Liam Kelly’s net.

Hibs made the better start in the second period and after ten minutes Jordan Roberts replaced Kaiyne Woolery.

Motherwell were struggling to create much but a free kick in the centre circle started the come-back.  The ball was played in and out of the area and eventually fell to Watt.  This time he found the target and the game was level.

Ricki Lamie had to leave play and Jake Carroll stood in at centre back.  Bevis Mugabi had another fine ninety minutes as he cleared threat after threat.

The visitors had to survive a nervous closing spell that included a helpful ricochet off the underside of the bar but the team was ablt to reflect of a point well won at a tough away ground.