Two second half goals condemned Motherwell to lose to Rangers on Wednesday night and heaped pressure on us going into Saturday's Lanarkshire derby with Hamilton Accies.

The neighbours from South Lanarkshire had a free evening thanks to their all weather pitch failing to cope with the weather and will have been interested - and happy - viewers of the action at Ibrox. We are so toothless going forward few teams in the league wouldn't be thrilled to see our name on their fixture list presently. 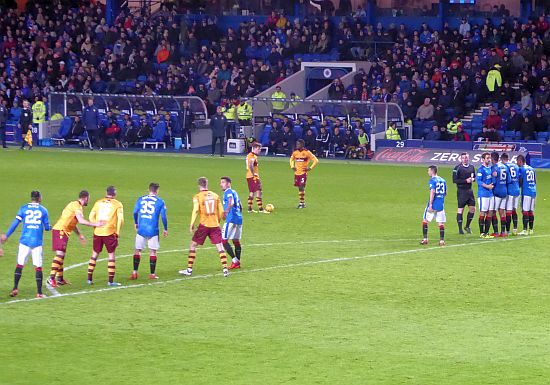 It could all have been different had Craig Tanner not fluffed a one-on-one in the opening minute when played in by Alex Fisher's header. He shot straight at Fotheringham and we would not make a better chance all game.

Rangers were little better though Krancjar could have done better when found in the box and Morelos certainly should not have blazed wildly off-target on the rebound Trever Carson.

Carl McHugh went off injured after failing to shake off a knock from a nasty fall while various injuries - including one which saw Jack carried off - saw eight minutes added the opening period.

We could have scored in the last of them but again Tanner, this time from an angle, flashed his shot just wide of the post.

Our initial 4-4-2 had changed to a 3-5-2 with Alan Campbell replacing McHugh but the loss of the opening goal soon forced Stephen Robinson's hand.

Carson duffed a kick and promptly stumbled over a routine save to conceded a needless corner that we failed to clear. Wilson was left in space and smashed home a brilliant strike in 56 minutes.

We rarely looked like equalising, with Carson twice redeeming himself to keep us in the contest, before Fisher glanced a half-chance wide in his last action before being removed.

The tie was soon settled though when Morales was given the freedom of the box and he converted with the aid of a deflection.

Afterwards Robinson pronounced himself happy with the work-rate of his men which was there for all to see. But so to was the stark lack of basic footballing ability and chronic lack of spark going forward.

Ultimately, the only thing to be happy about with tonight was Chick Young quoting Robinson as saying he will sign two strikers in January. They are urgently needed.