In a bizarre second half Motherwell had three players sent off and finished the game with eight players. The 4-1 score in favour of St Johnstone was almost incidental.

Referee Craig Thomson dismissed 'keeper Carson for handling outside the box while McHugh collected a second yellow for a robust challenge. Dunne completed the trio two minutes from time for ending a goal scoring opportunity. 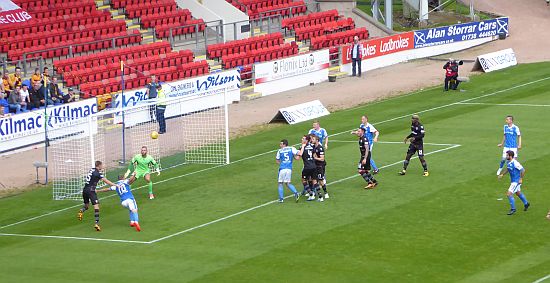 It was a remarkable sight as the game entered the dying minutes. Our beleagured men fought to keep the blue shirts away from goal but the final twist was to see a fourth coal conceded with the last kick of the ball.

Bowman and Fisher joined the starting selection as Moult and Tanner were moved to the bench. Motherwell were in the away strip and kicked off with their backs to the travelling support.

We started the better team and probed the home box without creating any chance but a bit of lax defending in the left back zone cost us the opener. Scougall emerged to fire into our area. The ball took a deflection and fell to MacLean who scooped it over Carson.

For the following ten minutes the play was all in the St Johnstone half but then O'Halloran collected outside our box close to the dead ball line. He was allowed to move unchallenged to a decent shooting position and drilled low to Carson's far post. We were two down.

The reward for our possession in the opposition half came in 27 minutes when McHugh delivered a free kick from 35 yards. The ball was headed on to the far post wher Rose was waiting. His header made the score 2-1.

The second half started with the pattern unchanged. We had the opening minutes in the oppostion half and soon came close when another McHugh dead ball found Rose at the far post. The ball flashed across the goal and Mannus palmed away for a corner. McHugh then had a header over the top before Cadden and Dunne had wild efforts off target.

Moult replaced Bowman after 56 minutes but the talking point arrived five minutes later when Carson was adjudged to have collected the ball outside the 18 yard line. The assistant was well placed and Craig Thomson took a moment before the red card was pulled. Bigirimana was sacrificed as Griffiths took station between the sticks. He saved the free kick.

Tanner came on for Tait and we had an attacking spell but O'Halloran killed the game off when he waltzed along our 18 yard line before driving the ball through Griffiths' legs.

Worse was to follow. McHugh collected a second yellow for a studs up challenge and we were reduced to nine men. The game was gone but then Dunne appeared to trip Cummins in the act of shooting and he joined the red card brigade. Griffiths saved the penalty.

It looked like we might escape without further losss but Dividson added a fourth on the whistle.

We'll have some enforced changes for next week.