Two and easy for the Mighty 'Well

A fine second half performance earned Motherwell a comfortable 2-0 win over St Johnstone under the Fir Park floodlights.  Campbell and Main got the goals to top off a fine happy for the Mighty ‘Well.

If ever a player earned his goal it was Alan Campbell.  He covered every inch of the ground, scored the opener and received a standing ovation when he made way for Bigirimana with the game won. 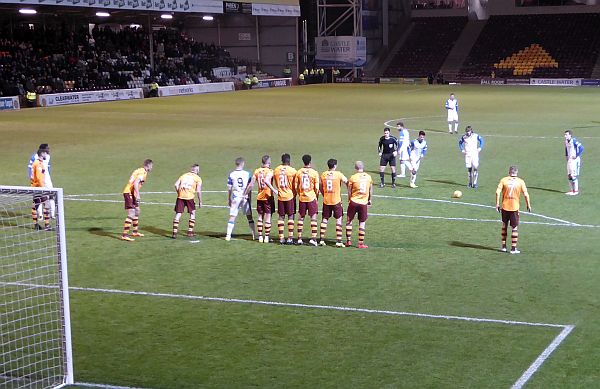 Carson was on hand to save

The home crowd also were given the opportunity to praise Curtis Main when he was replaced by Petravicius.  Our new striker scored the second with a well placed low drive but he had enough chances to notch a hat-trick.

Tait and Rose replaced Tanner and Hendrie in the starting eleven as we set up to face a team we had not beat for a couple of years.

Scougall gave our defence a warning early on but his chance would prove to be their best of the match.  The first half was broken up with a couple of pauses.  McHugh had to leave the pitch for around five minutes to have a blood injury contained and then Scougall limped off after treatment.

Main had a couple on target before Tait rattled the bar with a fine effort but the half ended level.

Stephen Robinson sent out a different team for the second period.  We were less direct and happy to pass the ball upfield.  The chances started to come.  Main snatched wide after Ciftci’s shot was blocked and then failed to beat Tannus when clean through.

Tait reached the dead ball line and caused a scramble in the six yard box with his cut back. We got the first goal after the hour and there was delight that Campbell scored.  He had already delivered an excellent shift in the middle of the park.  His strength and tenacity earning him the man of the match award but his day was complete when he finished from close in and Rose’s squared ball reached him.

Main got his goal on 70 minutes when he collected from Tait and fired low to the Mannus’ left corner.

St Johnstone were beaten and never came close to a consolation.  We pressed for a third and came close on a couple of occasions but there was to be no more scoring.

The win was hailed by the manager wheo reckoned we were excellent in the second half.  Few will argue with that assessment.