Both teams had their chances but it was the Motherwell forwards that proved to be more effective. They found the net midway through the first half and rebuffed the visitors' spirited efforts to claw their way back into the game.

Motherwell made three changes from the eleven that faced Hibs with Nielsen, Hammell and Carswell back in harness.  We created the first chance of the game when a quick free kick allpwed Hammell to fire a tempting low cross across the face of goal.  Sutton was the near post target but he was unable to get the telling touch. 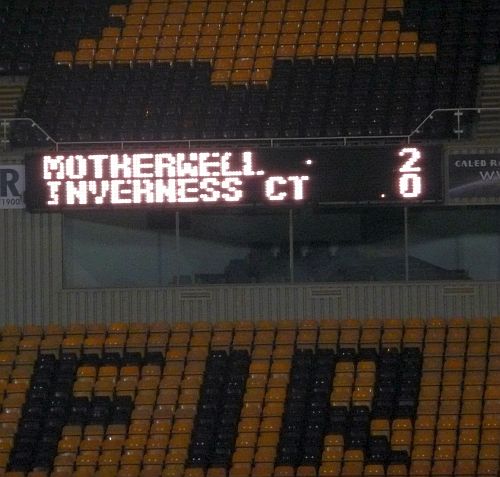 Inverness had a good spell that resulted in a couple of good attempts from Mackay.  He found the target on both occasions but Nielsen made fine saves.  The 'keeper went on to have a good, confident game and he can be proud of the clean sheet.

The opener came in 25 minutes moments after an Ainsworth volley tested Brill.  An Inverness attack broke down and Hammell  spotted Ainsworth free on the opposite wing.  He pinged a 70 yard diagonal ball to his target and the winger zipped into the penalty are to bury the ball to Brill's left.

The second goal followed seven minutes later.  Hammell was the provider of the cross that was allowed to bounce in the six yard box to give Sutton the opportunity of a diving header at the far post.  We had our two goal lead and, possibly with the memory of events at Easter Road fresh in mind, we determined to protect what we had.

Inverness swapped Christie for Doran at the break and set out to claw their way back into the game.  Bt it was McFadden who had the early chances.  First a left footed curler aimed for the far top corner and second an ambitious volley.  Both missed the target.  We had no shots  to trouble Brill in the second period and for most of the half we had to defend.  Inverness had the better possession but were let down by poor finishing.

Their good play mostly ended with misplaced shots though they did engineer one spell that required a series of desperate blocks to protect our goal.  Hutchinson was unlucky when his header from an Ainsworth corner missed the post by inches with the 'keeper beaten.

McCall admitted that the performance was not our best but the three valuable points set us up nicely for the second leg of the Highland double when Ross County visit at the weekend.