Goals in each half from Kevin Van Veen delivered Christmas cheer at Fir Park with a 2-1 win against Livingston.

Motherwell’s impressive home form has delivered 22 of the 31 points that has the team in fourth place in the table as the extended winter break arrives.  The Dutch striker capped a fine first half of the season with a double while Liam Kelly hardly had a save to make all afternoon. 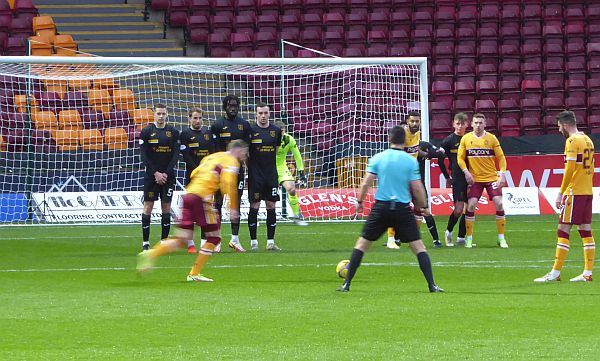 The manager sent out a starting eleven that included Connor Shields and Barry Maguire in place of Dean Cornelius and Tony Watt.  Our top goal scorer is reported as having agreed a pre-contract with Dundee United and a number of the lucky 500 made their feelings clear to him as he prepared for his seat on the bench.

Motherwell took an early lead when Forrest’s foul on McGinley produced a free kick some twenty five yards from goal.  KVV stepped up and launched the ball into the Stryek’s top right corner.  It was a marvelous strike and set the team on the way to victory.

The ball spent much of the 90 minutes in the air as both teams concentrated on clearing their lines and launching the ball forward at every opportunity.  Bevis Mugabi had another excellent game and his partnership with Sondre Solholm snuffed out Livi’s high balls without any stress.  The Norwegian had to leave the field with fifteen minutes remaining but he will have the best part of a month to recover.  Juhani Ojala made a welcome return as his replacement.

The home side had several chances to end the contest in the second half.  Sean Goss had the best of them before Van Veen converted a cross from the hard working Shields with a glancing header.

The goalscorer played a part in a fine move when he released Shields for a run on the left wing.  The cross found the tireless Kaiyne Woolery in a great position but his poor touch caused the 500 in the Hunter Stand to return to their seats.

The visitors spared no effort to find the net but their attempts were easily  rebuffed until the closing minutes when a low drive cross allowed Anderson to beat Kelly.  The four addition minutes were well marshalled by Alexander’s men and the game was won.

The hope is that football will return in the second half of January – fingers crossed!