Goals from Tait and Moult delivered Motherwell’s first points of the new season with a 2-0 win over Ross County at Fir Park.  After an insipid first half the manager made game changing substitutions to tip the game in ‘Well’s favour.

The first half was a dour affair and the visitors had the best of it but the introduction of Bowman and Campbell combined with a more urgent approach was enough to ensure that three points were well deserved. 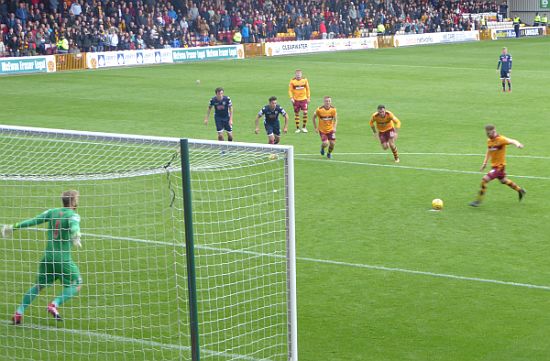 There were three changes from last week’s disaster in Perth.  Griffiths, Moult and Tanner joined the fray as Carson, McHugh and Bowman made way.

We were not to know that Moult’s speculative effort in the first minute would be the only effort in the direction of Fox’s goal in the first half.  Indeed, when Heneghan found his name in the referee’s book on 2 minutes there were thoughts that we might end another match short of a player.  But to the big man’s credit he escaped further censure despite having to cope with several physical challenges during the rest of the contest.

Griffiths produced a couple of fine stops before the break.  Gardyne had a decent chance but his fierce shot from the right was blocked and Routis, an early replacement for the injured O’Brien, tested our man with an overhead kick.

Motherwell failed to get any rhythm going.  Possession was needlessly conceded with weak passing while County were able to hold the ball and build attacks by finding their men.  McIntyre had reason to be a little disappointed that his team were still level as he delivered his half-time talk.

Bowman and Campbell were withdrawn from the warm-up as an early sign that change was afoot and their introduction was backed up by a spirited attitude from their team-mates.

Cadden started to find space on the right flank and tempting crosses started to flow.  It was a ball from the right that led to the first goal.  The defence failed to clear and Tait was on hand to side foot into the net from 8 yards.

Schalk had the best opportunity to equalise when he ran though on Griffiths.  Fortunately his effort from the angle f the six yard box flew over the goal.

The game was over as a contest in 75 minutes.  Bowman set Moult up for a shot from 12 yards but van der Weg impeded the striker and Alan Muir produced a red card as he pointed to the spot.  Moult placed the ball to Fox’s left and celebrated the winner.

We saw out the game with ease and cheered the team off the park.