Motherwell and Dundee United will have to resolve their quarter final tie at Fir Park in a fortnight after an entertaining 2-2 draw at Tannadice.  The home team had to come from behind twice but a replay was a probably a fair outcome.

There were two changes from last week’s loss in Inverness, Craigan and Saunders returned in place of Forbes and the suspended Jennings.  The solution to the pre-match guessing game about the formation was revealed when we kicked with Saunders, Craigan, Hutchision and Gunning at the back with a midfield four of Hateley, Lasley, Hammell and Murphy.  Sutton and Jeffers led the line. 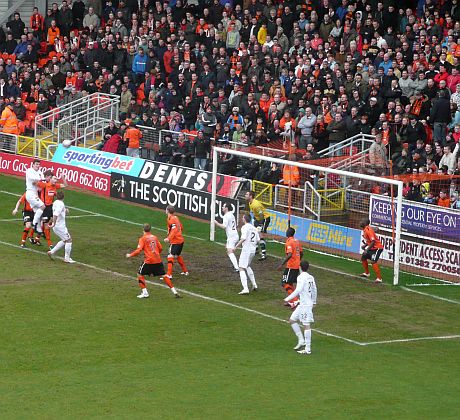 We got the start that all teams dream about.  Lasley kicked off, the ball was worked down the right wing and we got an early corner.  Hammell swung in a tempting ball and Sutton rose above the rest to power a header into the net.  Only fifty seconds had elapsed.

Both sides settled into the game and the teams exchanged attacks.  Randolph had to be at his best to get to a Goodwillie shot low down to his right and minutes later Buaben worked him again.  We countered with a volley from Lasley that had Pernis flying to tip away for a corner and a snapshot from Jeffers that whizzed beyond the post.

We got a break in 37 minutes when Saunders seemed to trip Goodwillie inside the box.  The referee had allowed play to continue following Hateley’s rash challenge on Swanson but a roar went up as Swanson (who had been booked earlied for diving) fell.  Hateley was then booked for his challenge.

United kept up the pressure and a couple of minutes later the equaliser arrived.  Watson delivered a cross for Goodwillie to take.  He had his back to goal but fired over his shoulder.  Randolph parried but the ball crossed the line.

There were no changes when the teams changed ends.  United started better but a low drive from Lasley from the ‘D’, just before the hour, reminded them that Motherwell were still in the contest. McCall swapped Humphrey for Murphy  in a counter to the opposition move that brought on Daly for Conway and we entered the last third.

We took the lead following some neat interplay between Lasley and Hammell on the left of the box that allowed Hammell to fire in a hard, low cross that Sutton converted at the near post.  The celebrations in the delighted Motherwell support had not died down before United drew level for the second time.  Some slack defending allowed Daly an easy tap in.

Both sets of fans were now on their feet cheering on their favourites but the pressure got to the players and the last ten minutes ended up in a disjointed, angry scrap.  Lasley came off to give Forbes a run but the game petered out with neither team able to grab a late winner.

We’ll be in Monday’s semi-final draw but so will seven others.