Watt Wins it for 'Well

Motherwell needed a late Tony Watt strike to beat Ross County 2-1 leaving the visitors without the point their effort deserved.

After a hugely impressive opening spell that included a cracking opener from Callum Slattery Motherwell found themselves on the back foot or long spells.  A careless goal was conceded but the unbeaten run was extended to six as Tony Watt smashed home the winner with ten minutes remaining.

Ricki Lamie replaced Bevis Mugabi in the starting line-up and Kaiyne Woolery got the game underway with Motherwell facing the few travelling fans in the South Stand.

Graham Alexander’s men produced a whirlwind start that earned a couple of corners before everyone had taken their seats.  With two minutes showing on the scoreboard Stephen O’Donnell took a throw-in level with the ‘County box.  There was a bit of an untidy scramble to gain possession and the ball fell to Slattery.  The midfielder took a touch and from 20 yards unleashed a pearler into the postage stamp corner.  It was a perfect start it it appeared that the Highlanders were about to be swept away. 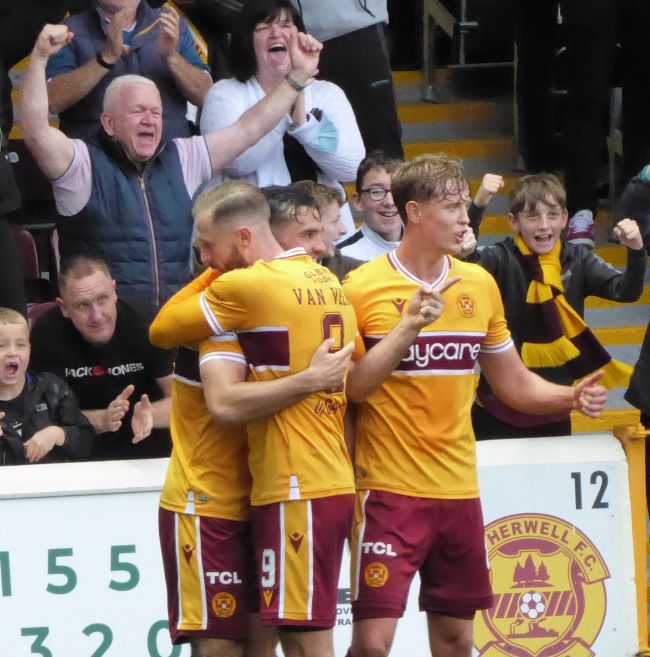 The score almost doubled minutes later when a low drive across the six yard box gave Kevin Van Veen a chance but a defensive touch untervened.

Ross County adapted to Motherwell’s tactics and started to probe the home defence.  Blair Spittal tested Liam Kelly from close range but his shot was blocked.

The equaliser before the break may have been deserved on the balance of play but it was a poor one to concede.  What seemed like a harmless mediam paced in-swinging cross from Regan Charles-Cook was missed by both attackers and defenders and the ball nestled in the corner of the net.

The floodlights tried to pierce the Fir Park gloom as the second half started and Watt forced Maynard-Brewer into a touch that forced the ball off the cross bar.  At the other end, with ‘Well substitutes ready in front of the dugout a ruck materialised in the Motherwell six yard box.  Desperate defending matched the frantic multiple attempts on goal but the referee’s whistle saved the day.

Tony Watt latched on to a ball over the top from Lamie and got the reward for his persistence whith a low drive through the ‘keeper’s legs to win the game.  He celebrated on the wall of the Hunter Stand and managed to escape a booking.

The three points keep Motherwell safely in the top half of the table and ready for the challenge at Tynecastle next week.