An early penalty from Sutton gave us the perfect platform before Inverness gifted us a second with an own goal.  We ruled the first half but in true Motherwell fashion we defended too deep and the visitors took full advantage.  They got one back and we had to endure a horrible half hour as the our defending became ever more frantic.  We survived, despite an incredible stroke of luck in the dying seconds.

The win sets a new landmark for the club.  We now have 67 points with the chance of more to come and the chants proclaiming our sixth European tour in seven years rang around Fir Park. 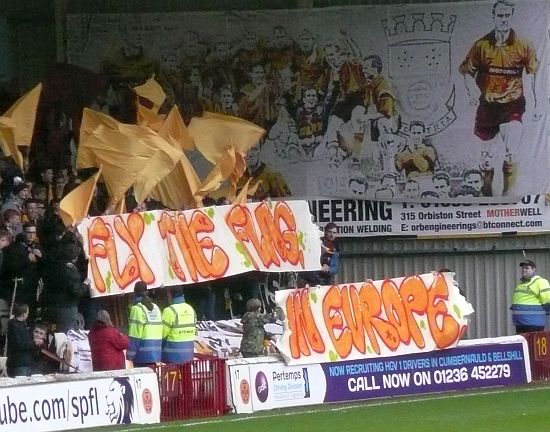 It was an unchanged staring eleven that kicked off facing the empty South Stand end in the wet, murky May evening.  Barely a minute had passed when Francis-Angol zipped a temping drive across Brill’s goal.  It was a sign of what was to come.  The visiting defence slumbered on the bye line but Sutton was alert.  He took advantage, stole the ball and was promptly tripped by draper.  The striker saw the ‘keeper move and swept the penalty home with four minutes on the clock.

We kept the upper hand for the rest of the half.  Francis-Angol was lively on the left while Lasley and Vigurs held sway in the middle.  Rare advances from ICT were mopped up easily by our back line.  A corner of the half hour was delivered by Vigurs’ left foot and met by Warren’s head on the six yard line.  His attempted clearance flew into the net to double our lead.

A third goal almost arrived when ZFA set up Ainsworth inside the box but the winger’s stabed effort from ten yards came off the bar.  Any observer unfamiliar with our style might have thought the game was over but Motherwell fans knew our weakness.

Inverness got back into the game in 53 minutes when a Shinnie shot was deflected off McManus leaving Hollis helpless.  It was the boost they needed and they upped their game.  A subdued McFadden was  subbed and Kerr came on to fill the right back position.  Reid was moved to midfield and we dug in.

There followed half an hour of nail biting frustration for ‘Well fans.  Gone was the fluency and composure that allowed us to control the game and instead we were camped in our last third.  It seemed likely that we would concede a second.  With ten minutes remaining Anier and Moore relieved Francis-Angol and Ainsworth as Sutton dropped back to help out.  Moore took a knock and had to leave the game. The three added minutes seemed like thirty and the culmination was a MacKay hitting the inside of the post.  We survived and the players were able to take their last home game parade with the win behind them.

On to Pittodrie on Sunday.