United dominated for long spells and Motherwell were restricted to long balls and set pieces as they struggled to cope with United’s flair.  Thankfully, we still have a six point lead and a game in hand over our fourth placed opponents. 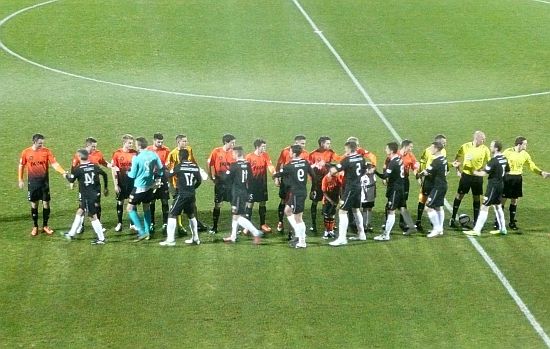 Stuart McCall elected to field the walking wounded and risked starting with the same eleven that beat Partick Thistle last Saturday.  That meant Hammell at right back and Francis-Angol on the opposite side of the park.   Neither Soutar nor Gauld made the United starting line up.

The action started early and a Vigurs’ free kick earned a corner in two minutes.  Ainsworth delivered, McManus headed and Sutton just failed to make contact at the far post.  At the other end Rankin let loose from inside the box and was inches from the opener.

United took the initiative and, with some tricky touches and a few passes, we survived a couple of scares.  The opening goal was a gift.  Hutchinson was woefully short with what should have been a easy back pass and Dow was presented with the simplest of chances.

We have one moment of hope before the break, Vigurs got on the end of a long range free kick and had the ball on target from close in but Cierzniak’s reactions were up to the task.  We lost the second with five minutes of the half remaining.  Gunning was lurking at the far post and collected a flicked on corner to side foot beyond Neilson.

Worse was to follow.  Within a minute of the restart Vigurs fouled Ciftci and from 30 yards Gunning sent a low trundle to Neilsen’s right corner.  The ‘keeper seemed slow to react and we were three down.

A glimmer of light appeared in 56 minutes when Paton raised a silly hand to a McFadden free kick and referee Madden pointed to the spot.  Sutton made no mistake from twelve yards, 3-1.  Craig Reid, signed earlier in the day, was given his debut at the expense of Ainsworth and he went to right back as Francis-Angol moved up.  With 15 left Anier replaced Vigurs as we made an unlikely drive to get back into the game.

We collected no bookings and appear to have suffered no fresh injuries.  That’s as much as we can take from the game!