Motherwell spurned the chance to ease relegation worries with an uninspired showing against a poor Ross County side and paid the price with a 1-0 defeat. 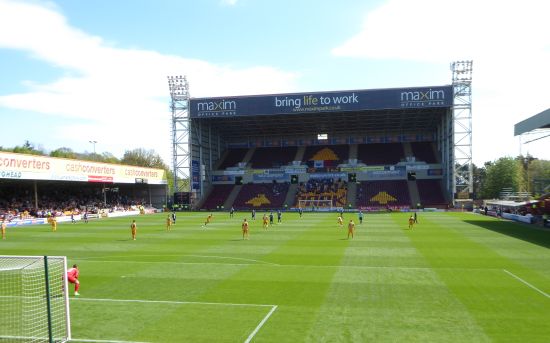 In truth neither side deserved three points from this poor advert for top flight football but County pounced on a defensive error and grabbed a second half winner.

Russell Griffiths was given a first start in goal and Ainsworth replaced Bowman in the opening eleven.  It was a perfect sunny day on a perfect pitch, only the football disappointed.

We earned three corners inside the first two minutes of the game but made nothing of the opportunities.  As it turned out we had a glimpse of what the following 88 minutes would offer.

Frear set up the few chances that came our way with some tempting low crosses driven across the face of goal but none connected with our strikers.  We had most of the ball in the first half but only a half hearted shot from McDonald gave Fox a save to make.  At the break the odds on a goalless draw must have shortened.

We had an early warning shortly after the start of the second period when Chow had only to connect with the ball when in easy scoring position but somehow he missed the ball.

Fox was tested on the hour after a bursting run through midfield.  Ten years ago our captain’s legs might have made more of the run but he won a free kick.  A tapped pass allowed Ainsworth to drill a goal-bound shot that Foz did well to push for a corner.

Hammell was replaced with Jules and within five minutes we conceded.  The substitute failed to clear when he had the chance and the ball fell to Routis for an easy finish.  Our heads dropped.

We never looked like breaking through the County defence.  The lack of creativity was obvious and the game was lost.

The game at Douglas Park next week could seal our fate.