We lined up in an attacking 4-3-3 formation with Elliott, Lehmann and McFadden leading the way to the United goal. In response to Greg Strong's omission we turned to a back four of Bernhard, Ready, Deloumeaux and Hammell. Adams, Ferrere and Corrigan formed the midfield 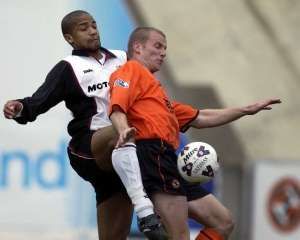 Eric Doloumeaux gets in close

The first half provided little in the way of entertainment. Neither team was able to string more than a couple of passes together and it was late on before there were any goalmouth incidents.

The best chance fell to Elliott when he met a pinpoint cross from McFadden on the six yard line and sent it wide. Ferrere could have done better when he had a clear shot from fifteen yards out.

United came storming back just before the whistle and we were happy to turn round level.

There was little improvement in the second half. Indeed, the pace and excitement generated by the players on the field ocassionaly disturbed the grazing pigeons which roamed the pitch at will.

We fell behind just after the hour when Thompson tapped in a rebound after DuBordeau did well to push a Miller shot on to the post.

Martinez replaced Lehmann (who was clearly short of pace) and Woods replaced a puzzled looking DuBordeau. But to no effect. We could have played all day without scoring.

On to Easter Road next week.