'Well lose the chase for best of the rest

Off-form Motherwell lost 2-0 to a St Johnstone side that was able to summon up more end of season energy on a sunny afternoon in Perth.

There was little to delight soccer purists as the penultimate fixture of the season unfolded at McDiarmid Park.  The visitors could grumble at the denial of a first half penalty but other than that there was precious little to get the travelling fans excited. 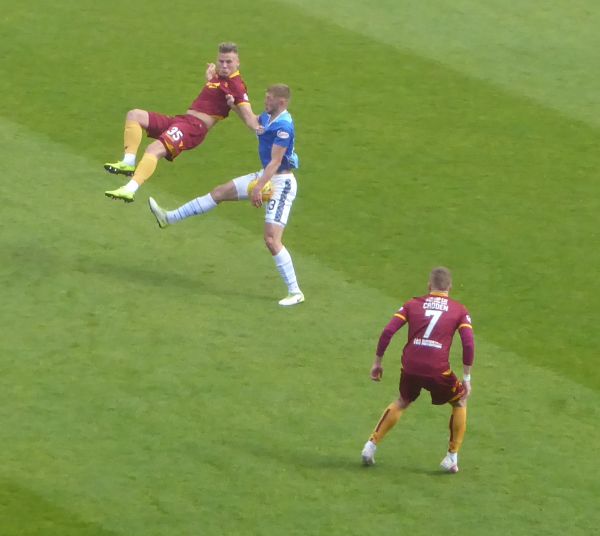 Stephen Robinson stuck by the same eleven as last week and, clad in claret tops and shorts with amber socks, they faced the town end as the hosts kicked off.

After almost ten minutes of ping pong some football broke out and Chris Kane missed a decent chance with his near post header.

The ‘Well Bois were in good voice and they were not slow to let Jake Hastie know of their dislike for Rangers as he appeared for an early warm-up.

We had a big penalty shout blanked following an intense Gboly Ariyibi shot from ten yards.  Scott Tanser was on the line and it looked like his arm kept the ball from crossing the line.  The referee (Colin Steven in his first Premiership game) was swamped with protesters and Ariyibi was shown yellow.

The home team got a boost ten minutes before the break when Kane got ahead of Charles Dunne with a run into the area.  The defender’s touch had the forward on the deck and the spot kick was awarded.  Tanser drove low to Gillespie’s left .

Both keepers made fine saves before the half-time whistle.  David Turnbull and Murray Davidson were the shooters.

A couple of minutes into the second period saw Dunne cross the halfway line then lose possession.  With our left flank exposed O’Halloran and Davidson had time and space to find the net beyond the outstretched arm of Gillespie.  Danny Johnson replaced Dunne in the 59th minute as Carl McHugh joined Tom Aldred in the centre of the back four.

Hastie was given a mixed reception when he replaced Ariyibi for the last fifteen and Jamie Semple came on for Chris Cadden but neither was able to make a difference to our low key performance.