'Well lost by two at Parkhead

Motherwell were beaten by two first half goals at Parkhead.  Early injuries forced defensive changes and the relatively narrow margin of the defeat was as much as we could expect.

McHugh and Tait were suspended and the manager's problems grew when Hammell pulled up with a tweaked hamstring in the warm-up.  The birthday boy had to watch from the sideline. 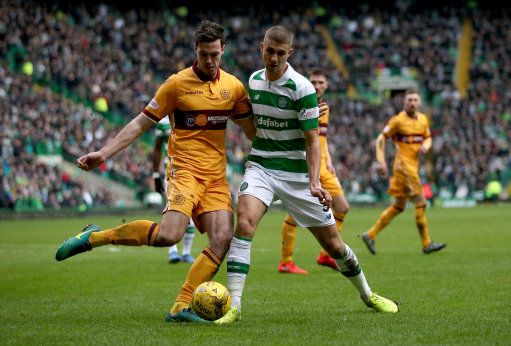 The game was barely two minutes old when McManus was on the deck with what looked like problem in the groin area.  He tried to continue but was substituted in the fourth minute.

Chalmers and Jules were called into action and they joined McDonald, McMillan and Clay as Frear and Lucas dropped out.

We adopted the usual 4-4-2 shape and pushed Moult and McDonald forward when the rare opportunities arise but for the most part we set out to deny Celtic space in our half.

Our opponents were kept at bay for most of the first period and Samson had little to do.  Henderson missed a sitter in 23 minutes but the home side were handed a gift ten minutes later when Jules clipped Dembele as he was moving away from goal.  A penalty was awarded and duly converted by the Celtic striker.

Motherwell's best chance followed and it fell to Pearson ten yards out.  He did not make decent contact and Gordon was happy to collect.

The second goal came from Forrest when the winger cut inside leaving defenders in his wake.  He had a narrow target but the shot across Samson found the far side net.

The second half was a bit of a non-event.  Bowman replaced Cadden in 54 minutes and soon entered the book when he collected the only caution of the game.

After the match McGhee expressed some satisfaction at the performance despite the result and we now look to next week’s meeting with Dundee as the search for points continues.