Motherwell suffered a 5-2 defeat at the hands of Celtic in the lunchtime kick-off at Fir Park.  Despite an impressive start and an early lead we ran out of steam and paid the price for some slack play.

The home side made three changes from the team that drew in Livingston.  Jake Carroll served the first of a two match ban, James Scott and Christian Ilic were on the bench and Liam Grimshaw, Chris Long and Sherwin Seedorf started. 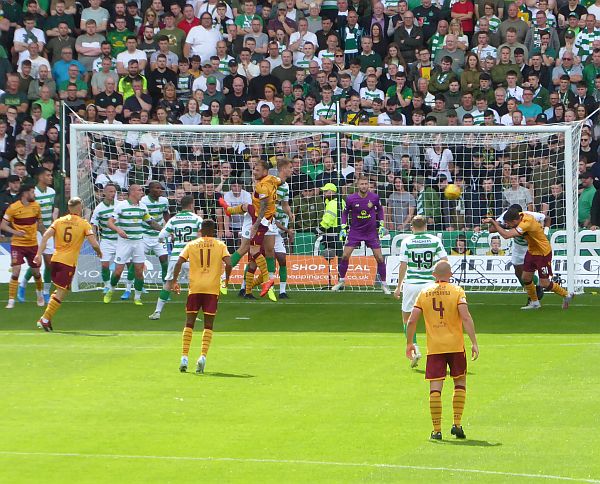 There can be no complaint at the result as the finishing of visitors in the second half was enough to win any game.  That said, Motherwell took control of the first quarter of the game and had Celtic pinned back defending the South Stand goal.

In his BBC interview after the game Stephen Robinson described our first half performance as “terrific” and few would disagree with that assessment.  We played with press and purpose and deserved the lead that came after 12 minutes when Liam Donnelly forced the ball through Bain.

Loss of concentration cost dear a minute after the goal celebration ended.  Ajer latched on to a long pass and fired under Mark Gillespie to bring us back to earth.  We shook off the blow and retained the upper hand for a while but Celtic began to impose themselves as the half progressed.

Nick Walsh judged that Gallagher impeded Griffiths and awarded a free kick not far from the 18 yard line.  The striker drilled the ball to Gillespie’s left corner and we ended the half a goal behind.  It was hardly a fair reflection of the balance of play.

Ilic replaced Seedorf at the break but the tide had turned.  Our momentum was gone and after the game passed the hour we conceded the first of three second half goals.

Forrest,  Edouard and Christie (from the spot) racked up the visitors’ tally to five before Donnelly nicked his second in added time.

The manager in his reaction to the BBC bemoaned the combination of individual errors and the lack of fitness of some of his new players.

Next up is the Betfred tie against Hearts at Fir Park on Friday.