Motherwell earned a massive three points at Pittodrie thanks to Liam Donnelly’s header at the end of the first half.  As a spectacle it was a poor affair but the result prompted celebrations at the final whistle.

We now enjoy a four point lead over Aberdeen with our 40 points securing us in third place.  There was no shortage of effort from the men in the white away strips and they will enjoy the homeward journey. 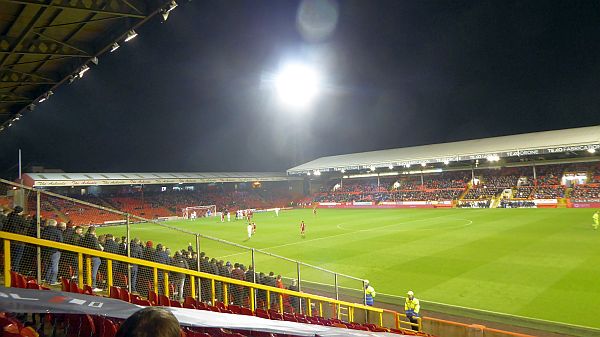 There was no surprise in Stephen Robinson’s selection as Liam Grimshaw and Liam Donnelly returned at the expense of Richart Tait and Jermaine Hylton.

We kicked the game into action and faced the beach end. In the opening ten minutes a net across the half-way line would have formalised the game of headie tennis that seemed to occupy the players.  They followed that up with a game of foot tennis as long punts flew from end to end with neither team able to string together a couple of passes.

Twenty minutes had elapsed before we saw any action in the home box.  Liam Grimshaw sent a ball along the right touchline for Mark O’Hara to collect.  He dispatched a dangerous low ball across the six yard line but there was no telling touch.

Chris Long had been on the ground a couple of times before his ankle was caught at the edge of the penalty area.  No foul was awarded but the knock ended his involvement and he limped off to be replaced by Christian Ilic.

The substitute got a decent shot on target a couple of minutes before the break.  We were into the two additional minutes when we were awarded a soft foul thirty yards out on the right touchline.  Liam Polworth delivered a tempting cross to the far post and Donnelly took advantage.  He rose high above the defence to power a header beyond Lewis.

It was an unexpected bonus at the end of an awful first half of football but the goal proved to be the winner.

Aberdeen dominated the second half as we concentrated on keeping the attacks at bay.  There was no fluency to the Dons’ play, it was a matter of throwing the ball forward with increasing urgency and hoping for a break.

James Scott was replaced by Ross McIver and later Christian Ilic was removed to allow Bevis Mugabi to strengthen the back line.  We survived a penalty claim Gillespie earned another clean sheet and players and fans enjoyed a happy few minutes as Pittodrie emptied.

Can we end the week with a third win when we return to Fir Park for the visit of Hibs on Satuday?