The FPC FC team was formed in May 2001 to play a challenge match against the Unofficial Motherwell site.

The team was made up of youngsters and some older guys who had not kicked a ball in some time and this was duly reflected in the score – a thumping 9-1 defeat!

However, someone clearly thought there was room for improvement and under manageress Piglet the team decided to stick together and enter the IFA Supporters League.This is a league in only the loosest possible term and basically consists of one group of fans playing another before their clubs’ real game in the afternoon.

The team changed a lot in the early days and some sizable defeats were taken.


Nonetheless, the spirit of FPC was always to go to games, have a good time and drink as much as possible.Several games on from May 2001, the team finally recorded their first win with a 3-2 success over local rivals Internazioswally (Airdrie). 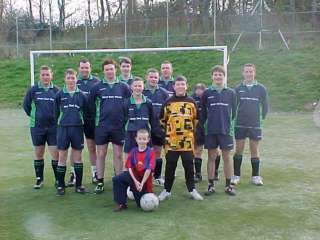 The first squad - who do you know?

The highlight of the IFA season is always the end of season bash in Leeds.Dozens of teams meet for a two day festival of beer and football.It’s always funny to see the real ‘football’ teams at this event – those whose manager has them tucked up in bed by 10pm – take on the social players who have crawled home from Leeds town centre three or four hours before kick off.The social players usually finish off any lingering chances of victory with a huge fry up each morning! 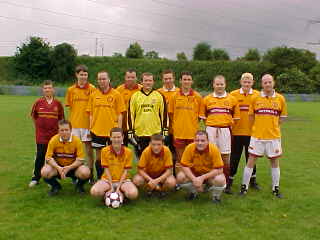 The format ensures that everyone plays in leagues of four on the Saturday and depending on competency, one of the two knock out cups on Sunday.On all three occasions FPC have attended, they have been entered into the lower ‘Plate’ tournament on Sunday and this has now become the holy grail which new manager Frazzle seeks.On the first visit, a great run saw victories over Ipswich, Nottingham Forest and Manchester United and the team made the final.It looked destined to end with a penalty shoot out until a dreadful defensive disaster involving three or four players saw Aberdeen win in the last minute of extra time. 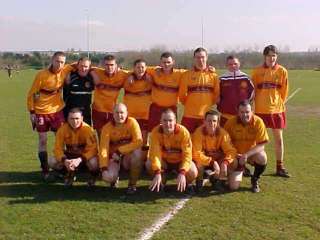 The next season, Reading and Ayr B were beaten before Ayr A took FPC all the way to penalties. Again, luck was lacking and the Corner crashed out 4-2 in the quarter final shoot out despite not losing a goal in 100 minutes of knock out football.Last season was a big disappointment with a meek first round surrender to the merged (and strong) team from Partick Thistle and Queen of the South.

The close season in 2004 saw major upheaval in the FPC FC offices as manageress Piggy passed the baton onto Fraz.His new enthusiasm gave the team a lift off the park and many fixtures were arranged.Sadly the results on the park have not always reflected the ability of the players (or so they claim!) but the team recently achieved their first victory for the new Gaffer (6-4 against St Johnstone).Let’s hope a good run starts in the months leading up to Leeds! 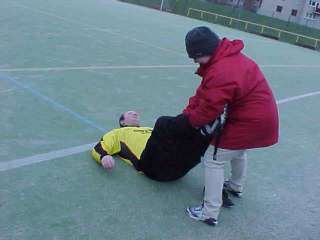