GLF75: This edition of the GLF fanzine carries a an excellent profile of Motherwell legend 'Sailor' Hunter.  Why is there no memorial at Fir Park?

The boy who would become known as, John ‘Sailor’ Bryson Hunter was born in Johnstone, Renfrewshire on the 6th of April 1878.  Motherwell Football Club hadn’t been formed yet, but the man who would become its greatest influence was on his way !!!

At the age of 18 he signed for Paisley side, Abercorn, who had been relegated to Division two the previous season.  While Abercorn did not improve at all during his time there – in his final season they finished bottom of the Second Division and thus bottom of the League, Hunter was snapped up by Liverpool.  He became part of the Liverpool side that won their first ever First Division Championship in 1901, however a year later, after he failed to settle in Merseyside, he was persuaded to move back to Scotland, signing for Hearts for £300 in a joint transfer with Tom Robertson.  He was to help the Jambos reach, but lose, the 1903 Scottish Cup Final against Rangers.

In 1904 he joined Woolwich Arsenal in a £165 transfer, playing 22 times for them in 1904/05 season, before joining Portsmouth, then of the Southern League.  But it was only when he joined Dundee in 1907, that he came into his own, moving from left midfield to centre forward, that he became a quite prolific goalscorer, and earned his one and only cap for Scotland in a 3-2 defeat by Wales down in Wrexham.

In the 1910 Scottish Cup Final, Hunter’s Dundee were up against a strong Clyde team who had knocked out the champions, Celtic 3-1 in the semi-final, and were 2-0 up in the final with six minutes to play, when ‘Sailor’ scored a goal to give Dundee hope.  Two minutes later Dundee equalised and the teams had to do it all again.  The first replay ended in a 0-0 draw but Dundee won the second replay 2-1 with Hunter notching the winner.  It was to be his finest moment as a player in Scotland.  He signed for Clyde in September 1910, but injury forced him to retire six months later, without making a single appearance for the Bully Wee.

Two months later, in April 1911, Hunter was appointed manager at Motherwell at the age of 32 and the man who would transform our beloved Club began an incredible journey that would leave his name indelibly etched into the fabric Motherwell FC history.

The Steelmen had finished second bottom of the First Division the previous season, just above relegated Queen’s Park.  Hunter would improve their position slightly in the following season, although the highlight was surely the reserve side winning their League title for the first time.  Motherwell improved steadily on the pitch over the next few years, as did John Hunter’s reputation off it.  The was borne out by the Directors handing him the Secretary’s job in addition to his managerial duties mid way through the 1912/13 season (the first in which the club sported the famous claret and amber colours).  In August 1916, Hunter gave a debut to a young centre forward signed from Parkhead Juniors, Hughie Ferguson, who hit a double against Raith Rovers, and followed it up with a hat trick a week later against Dundee.  Ferguson was Motherwell's top scorer in every one of the 9 seasons he played at Fir Park, amassing a terrific 362  goals and to this day he remains Motherwell's all-time top scorer.

In the next four seasons Motherwell never finished lower than fifth in the league, but over time financial restraints began to tell on the club; local unemployment was higher than it had ever been, crowds were down, and the club had to abandon their reserve team.

Motherwell began to slip in the league and they finished the 1924/25 third from bottom, on the same points total as the two teams immediately below them.  Indeed, it was only Hughie Ferguson's goals that kept the club in the top flight.  The following season started off pretty well for Motherwell, but in October Hughie Ferguson was sold to Cardiff City for £5,000, putting paid it seemed, to the clubs hopes for the near future.

Mr Hunter though had identified an instant replacement for Ferguson in the shape of another signed from Parkhead Juniors, Willie McFadyen, who would more than justify the manager’s faith in him.  He took Ferguson’s number 9 shirt and spookily, repeated his predecessors debut feat by firing a double past Raith Rovers in a 5-0 romp.  Motherwell finished fifth that season and for the next eight seasons they would not finish lower than third, with a League title to celebrate in 1931/32.

The original ‘famous five’ adorned Fir Park in this era, with the names, Murdoch, McMenemy, McFadyen, Stevenson and Ferrier  tripping off the tongues of the Motherwell faithful, as the men in claret and amber played a brand of football that had the world drooling in anticipation whenever Motherwell came to town.

During this era, ‘Sailor’ Hunter saw the advantage of taking such a football team abroad.  He was the architect of three successful ‘world’ tours undertaken by the club, played to big crowds, to boost finances.  The summer of 1927 saw Motherwell tour Spain (beating Real Madrid to win the King of Spain Cup and drawing with Barcelona to secure the Barcelona Cup).  In the following year Motherwell headed to South America for some ‘missionary’ work.  Matches in Argentina, Uruguay and Brazil yielded yet more silverware, and, 1931 the Steelmen visited South Africa in the most arduous of tours.  Fifteen players played 15 games within two months, losing just the once, with McFadyen scoring 30 of the 57 goals Motherwell rattled past the opposition.

It proved to be the perfect preparation for the new campaign which would see the Steelmen scoring an incredible 119 goals in 38 league games to secure the League Title, after twice finishing runners-up.  Motherwell became the first club to win the Championship outside the Old Firm in almost thirty years.

Despite the foreign tours being money-spinning for the club, Hunter insisted on the Board curtailing them in future years, which they did, into 4/5 games at a time, and to the likes of Belgium and Denmark (including Odense !!!)

It was also during this period that ‘Sailor’ installed a cup fighting spirit at the club, resulting in three Scottish Cup Final appearances, the first in the club’s history. 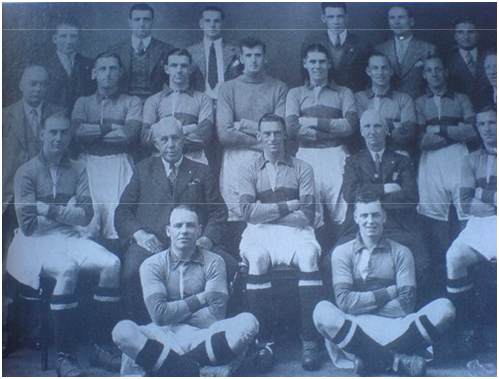 On tour in South Africa with Mr Hunter, centre right

John Hunter would remain as secretary/manager at Fir Park until the Summer of 1946 when George Stevenson, inside left and playmaker of the team which won the Championship, would take over the managerial duties, leaving our ‘hero’ the, then, important secretary role.

1952 saw the Fir Parkers win the Scottish Cup for the first time, and the first stop for the victorious Motherwell team after lifting the old trophy was at Fir Park where Mr Hunter, who had been unable to witness the Hampden showpiece due to a deterioration of his eyesight, held the prize.

‘Sailor’ found it hard to leave Fir Park and remained as club secretary until his retirement in 1959 at the age of 80.  After 48 years service, the club granted him a weekly pension of £10.  The legend that was John ‘Sailor’ Hunter died, aged 87, in January 1966.

It’s pretty safe to say that Motherwell Football Club would not be in the prominent position it is today within Scottish football, were it not for the vision, wisdom and influence of John Hunter.

We should all hang our heads in shame that this great man’s name is not remembered enough, by those of us who attend Fir Park on match days.  Future generations will most likely ask about the legends of Davie Cooper and Phil O’Donnell as their names are, rightly, prominent at Fir Park.  It’s a travesty that the greatest Steelman of all time, bar none, is not yet afforded the same accolade.