If you were one of the folk who had given up hope of ever seeing us in a cup final then this night was yours. No one gave us a chance - Celtic had won their last four Scottish Cup semi finals and according to saying "Celtic don't lose replays".

Inside the opening minutes a corner caused havoc in our six yard box and was frantically cleared. Another corner led to Paul Elliott smashing the ball through a ruck of players into the net but it was ruled out for offside. But with our defence being embarrassingly shambolic, it didn't look as though we would hold out for long. We didn't.

Celtic's whirlwind start forced yet another corner and after a scramble and touches from McCart, Coyne, Boyd, O'Donnell and Elliott Celtic got the lead they deserved.

But at this point they seemed to ease off. We began to look respectable although we didn't look like getting an equaliser. Then, totally against the run of play, we scored. Ferguson swung in a cross from the right and it was met on the volley by Ian Angus. He didn't quite catch it right though and the ball deflected to Dougie Arnott who drilled the ball under Bonnar. 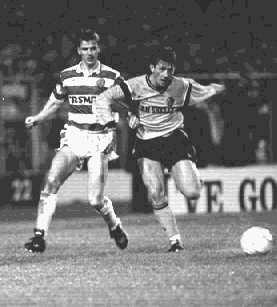 Dougie could beat Celts with one leg!

It didn't take a football pundit to tell you that Celtic were still favourites though and they fought back strongly. To use a famous phrase, our back four were at sixes and sevens and Celtic's corners were causing us no end of problems. It was no surprise when they regained their lead and once again, the defending was abysmal. John Philliben slipped in the box and Anton Rogan played a one-two off his back before shooting into the corner.

Celtic should have killed the game but Tommy Coyne (probably using his super human powers to see into the future) blasted over with only Maxie to beat.

At the beginning of the second half, I was still sure we would get one more chance. I thought this was optimistic given the fact that we had hardly been out of our own half but whatever the Hamster said at half time worked wonders. We looked a different team completely to the timid cowards of the first half - we looked like champions.

John Philliben forced Paddy Bonnar into an amazing save but Celtic's dominance was well and truly gone. Then Dougie equalised with a wonderful header after cross from Luc Nijholt. There was nothing Paddy could do this time and all the smart money was on us.

But with fifteen minutes to the game was still up for grabs. The pundits were shaken but still tipping Celtic. Then came the moment no one will forget. According to the FPC poll this was the best goal ever scored by Motherwell. Colin O'Neill - Hampden Park - 2-2 with fifteen minutes to go in a semi. Rather than try the simple and obvious through ball to Nick Cusack Psycho shot instead. Goodness knows what possessed him to shoot. He was at least thirty-five yards from goal and he never had a particularly good ratio of long shots to goals. But shoot he did and the ball left his foot like a rocket. Bonnar actually made a very good effort and was only inches away from tipping it over. Thankfully it was out of reach and the 'Well fans were in fantasy land.

Paul McStay was unlucky to see his shot blocked by a combination of Maxwell and Nijholt but there was no doubt that this was to be our night. That was made certain when Steve Kirk curled a remarkable shot into the top corner. I like to think he meant it - but I suspect otherwise. Despite my cynicism over his intentions, I'd never want to ask him. It's a bit like Santa Claus - you know it's all made up but there's the tiniest of chances that he exists. As long as I don't know for certain, maybe Steve Kirk meant to float the ball into the far corner like that.

Celtic were beaten and everyone knew it. Our name had to be on the cup after this and no amount of thought was going to persuade me otherwise. This was going to be our year.