After Ross County, before Hearts

Motherwell’s win over Ross County allied to favourable results elsewhere combined to strengthen the Steelmen’s hold on third place. Next up is a trip to Tynecastle to face the bottom team.

The comfortable win over the Highlanders brought back memories of the ‘Well displays in the first half of the season.  Those had been sadly lacking since the turn of the year but Wednesday’s performance will spur the belief that a high placed finish is within reach. 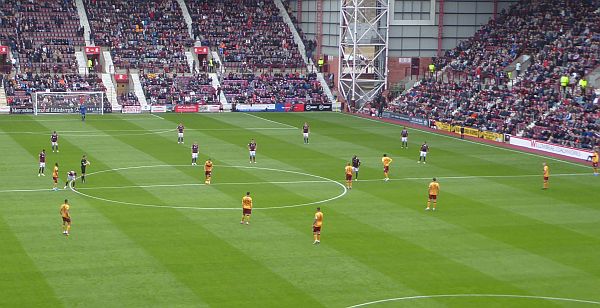 It was fitting that Allan Campbell earned the headlines not only for his brace on the night but for his high powered display all through the season.  Chris Long seems to be back at peak form and his contribution was significant.

The focus now turns to Saturday’s match against Hearts.  ‘Well fans have fond memories of our last trip to Gorgie when we left with a 3-2 win.  The close margin hardly reflected the superiority of the visitors.

Liam Donnelly will miss out as he completes his suspension but we can expect a Motherwell eleven little changed.  David Turnbull was not called from the bench on Wednesday and he will be desperate for some more game time.

Hearts gave their suffering fans a boost with the recent cup dismissal of Rangers and the derby win at Easter Road but they returned to the basement when Hamilton took three points at Ibrox.

The season is in its last third and the horrible threat of relegation looms large in the maroon side of Edinburgh.  The pressure on the players will grow with every passing week and every misplaced pass will cause a nervous ripple in the stands.

If Motherwell approach the game in the correct manner and maintain the midweek momentum then a 2-1 win is possible.

Remember our last trip to Tynecastle?