On this day in 1947 Motherwell lost a Scottish Cup semi-final to Hibs when a bizarre goal ended the game after 141 minutes.

It was the first post-war competition and all ties were played to a finish.  The teams were still level after extra time and  a 'next goal the winner' spell began.  The report from the Sunday Post tells the tale. 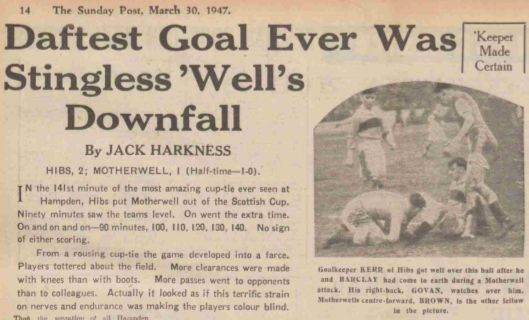 From a rousing cup-tie the game developed into a farce. Players tottered about the field. More clearances were made with knees than with boots. More passes went to opponents than to colleagues. Actually it looked as if this terrific strain on nerves and endurance was making the players colour blind.

Then the sensation of all Hampden sensations. Goalkeeper Johnstone punted normal clearance upfield. The ball came sailing down towards right-half Howie. Nine times out of ten —in fact, ninety-nine times out of a hundred —he would have trapped that ball. This time just lifted his boot and thumped it back.

Never was a ball neater hit. It soared into the air, over the heads of the players, sailed just under the bar Into the vacant goal. The combined sighs of the spectators, rather than the cheers, could heard miles away.  Hibs were into the final.

The real portion of the play—the original 90 minutes —were rather swamped the succession of " extras." But let's not forget them.

For 80 of the 90 minutes they buzzed round Hibs' goal like bees round a jam jar. Only—bees would  have thought out some concerted action to lift the lid off.

Right against the run of play Hibs scored.  A simple free-kick up the left, a flick by Ormond to Cuthbertson. A header which swerved round Paton and landed plumb at the feet of Turnbull.

From fifteen yards the brightest star on Scotland's football firmament took careful aim and sent the ball sizzling on its merry way into the net.

Back came Motherwell. Redpath was cutting out every ball destined for Gordon Smith. He was making this lad Shaw behind him look a far better back than his National namesake of the Hibs.

Redpath, too, found time to push inviting balls up to Bremner. Gordon weaved here and there, cutting this Hibs defence to ribbons. It's really amazing to think the number of times the Easter Road men were down for the count of nine—only to struggle to their feet on the stroke of ten to avert a score. It seemed impossible—actually fantastic —that Motherwell couldn't score with all their pressure. Big boy Brown was too slow on so many occasions must have missed a yard of goals.

It'll take penalty." said this Hampden crowd. And these shrewd football lads were right. It did take a penalty.

Just as we were about to close our notebooks and record the fact we had just the greatest football travesty of the century, the penalty arrived.

Barclay whacked a ball goa!wards. It caught Aird the arm. Kilmarnock scored from the spot.

In the closing minutes both sides put everything into it. They didn't know, as we knew, that they had a lot football to play yet. We just couldn't see the pair ever being separated.

Then the extra times. No superiority here.  Both teams reduced to the state where they were almost hanging on each other's tongues. Nobody cared who scored so long somebody scored. And it's a pity when football gets that way.

Hibs defence looked to me as a bit stale. Fortunately, Howie and Kean were in the mood to do everybody else's work. Turnbull and Finnigan were their best forwards, although I will say this whole rank never had the ball long enough to shine.

I was sorry for Motherwell. They were easily better in defence. In Redpath they had the finest constructive half-back afield. They supplied the real forward skill, with the cantrips of Watson and Bremner plus the raiding Humphries and Barclay. But they just couldn't burst a balloon when it came marksmanship.

But all the tit-bits, all the good luck, and all the bad luck of this game will be quickly forgotten. Swamped by the memory of typical five a side goal which won most important marathon Scottish Cup-tie.