Easy win for Motherwell in the claret and amber clash

However anyone wishing to see a claret and amber fest between the cousins was disappointed as both sides ran out in their away strips. 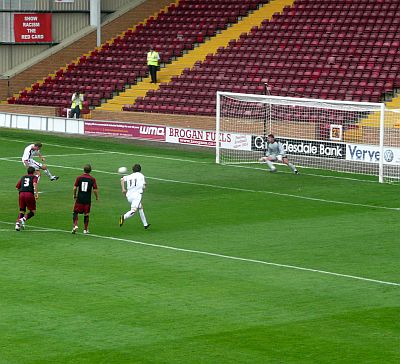 Porter scores from the spot

But that had no impact on the match as Motherwell sauntered to victory with all the goals coming in the first half.

Straight from kick off 'Well attacked the southern goal and an inviting cross from Lasley was tapped in by Clarkson with less than half a minute on the clock. 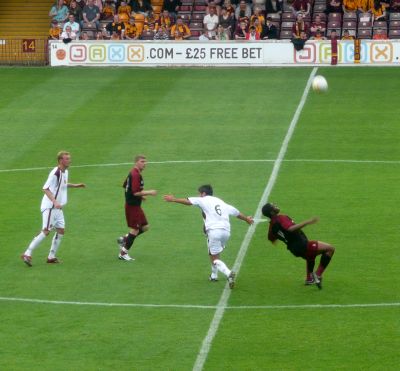 The second soon followed when Porter was hauled down in the box and though the 'keeper got a hand to his spot-kick he couldn't keep it out.

Darren Smith had started on the right wing but his switch to the left proved very effective.Within minutes he latched onto a wonderful pass from Hammell to side foot into the bottom corner, making the score 3-0.

And Smith then set up Bob Malcolm for the fourth with a quick pass inside the box after his initial shot had been saved.

After the break Bradford did better but they could produce little of note for their travelling fans to cheer.

One shot from the visitors rattled the bar but by then the game had all the pace of a training exercise.

O'Brien hit the post and Slane missed a glorious opportunity in the closing stages but the game finished 4-0.

A new trialist (Soley) played at centre half for part of the game and though he looked slow, there was certainly no hesitation in attacking the ball.

But despite this convincing win, Mark McGhee will know that with no signings completed he has to do a lot of work before the season starts in two weeks time.