Willie Hunter, inside left in Motherwell’s  Ancell Babes, has died aged 80.  Those who saw him play will remember his magical skills.

Hunter joined Motherwell in 1957 and wore claret and amber for ten years before leaving for a short spell with Detroit Cougars.  He made well over 200 appearances and was as much a goal scorer as provider. 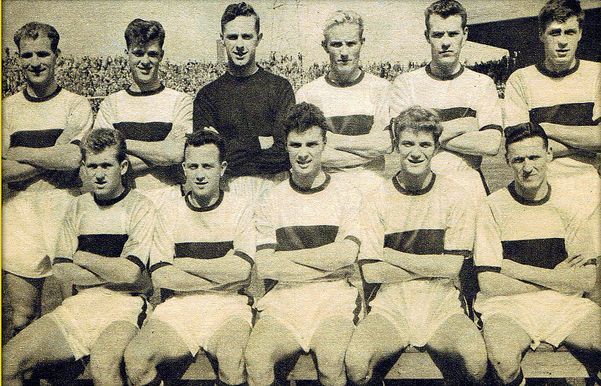 He more than held his own alongside Ian St John, Pat Quinn and Andy Weir.  Three caps came his way in 1960 and he scored against Hungary in a 3-3 draw, he was 20 at the time.

His link with St John was to resume as assistant at Portsmouth.  Later he managed Queen of the South then Inverness Caledonian.

In an interview for the Scotsman in 2017 he talked about the perils of heading the old leather football of his concern for players’ health.  He became an ambassador for Alzheimer Scotland on the Football Memories initiative and worked on their behalf for several years

“One time I got knocked out. I was strapped up like a mummy and so was finished but I remember the same thing happening to St John in a match against Clyde and, with no substitutes in those days, he was sent back on to the park only he didn’t know where he was and started running the wrong way.”