It has been almost two years since we last played Morton in the League Cup.  Such was the alarm at the defeat in Greenock the the manager lost his job.  Stephen Robinson will be aware of the need for a positive result on Saturday.

Ian Baraclough elected to rest several senior players for the tie in September 2015 and we paid the price.  A late McDonald goal gave us a chance of redemption in extra time but justice was done and Morton deserved the celebrations that followed.  We had stuttered into the new season and needed an additional 30 minutes to get the better of East Fife in the previous round.  Time was called and the manager was dismissed. 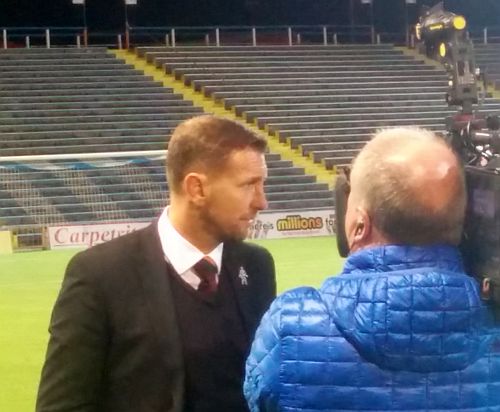 Not an easy post-match interview

After a couple of weeks under the charge of Kenny Black we recalled Mark McGhee for his second spell in charge.  He turned the season around and deserves huge credit for our eventual fifth place in the league table.

Unfortunately he was to see his charges suffer as 2016/17 progressed.  In February he was relieved of command and his newly appointed first team coach Stephen Robinson was entrusted with our fate.  After a narrow flirt with the play-off place we survived to face another season in the top flight.

This will be the first full season under the influence of the Northern Irishman.  He has refreshed the squad with 9 imports and 15 departures (and a further couple left when loans ended).

He has guided them though a pre-season training camp and four warm-up matches.  Saturday's Betfred Cup opener at Hampden resulted in a convincing 5-1 win and we are the seeded favourites to win Group F.

So far, so good.  What will the next few months deliver?