The game brought season 1936-37 to an end with Motherwell finishing fourth in the league.  It was a campaign that produced 67 goals for the Fir Park side and they topped the scoring chart alongside Hearts.

Friday night football is not a recent invention as this match proves and on this occasion there was to be a big parade from Fir Park down to the railway station as double hat-trick hero Alex Stewart was carried shoulder high by jubilant home fans. 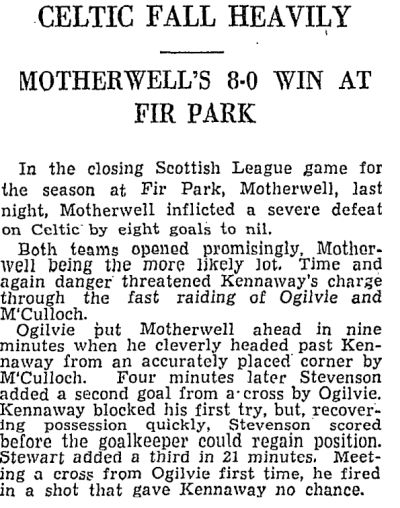 Extract from the Scotsman

Duncan Ogilvie opened the scoring after 9 minutes when he headed home from a corner kick.  George Stevenson got the second four minutes later when he converted Ogilvie’s cross at the second attempt.  Stewart opened his account with goals after 21 and 27 minutes.

The Celtic ‘keeper, Kennaway, failed to appear after the break and Buchan took over the guardian’s job.  Stewart complete his first treble after the hour.  The visitors suffered another blow when defender Morrison went off injured.  Stewart pressed home the advantage with another three to send the home crowd home in joyous mood.

The Glasgow Herald noted that “Some temper was shown and three players had their names taken by the referee”.