Motherwell were well beaten in Wednesday’s friendly at Ibrox but the players will have benefitted from the tough workout.

The game kicked off after a two hour delay reportedly due to the late arrival of covid-19 test results but it did nothing to blunt the sharpness of the home side.  They scored twice in the first ten minutes and added another on the stroke of half-time as Moherwell chased shadows. 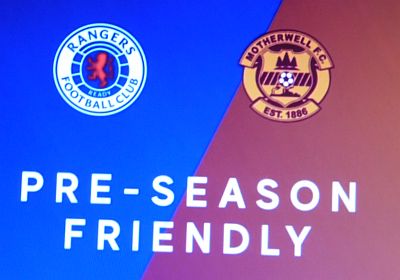 Motherwell opted for the open game rather than a defensive shell but that gave space for the hosts to exploit.  Kent started the action with a volley from 19 yards.  Campbell’s clearing header had spun high and offered a tempting opportunity.

The second followed reluctant defending on our right. Barasic crossed and Hagi leapt at the chance of a header on the six yard line.  Captain Carson had no chance at either early goal.

It looked like the safety of the interval would come without further loss bit the quick feet of Aribo through the crowded box gave him the chance to slip the ball beyond the ‘keeper.

We managed one shot on target in the first 45 minutes when Polworth had an attempt from long range.

Stephen Robinson made three changes at the break: Gallagher, Turnbull and Hylton were introduced as Campbell, Polworth and Long made way.  Just before the hour Watt came on for White and with fifteen minutes remaining Maguire replaced O’Hara and Robinson replaced Hastie.

The changes produced more of an attacking threat from Motherwell and both Donnelly and Turnbull had close range shots blocked.  But we conceded an own goal when Lamie attempted to cut out a low drive across goal.

Robinson gave Turnbull a chance for a late consolation but under pressure his attempt flew wide of the top corner.