The news of the death of Ian St John marks the passing of one of Motherwell’s stellar forwards.

Announcements on the Motherwell and Liverpool websites brought the news that the great centre forward had died on the evening of 1 March 2021.

He was born and brought up in Motherwell and became the cutting edge in the wonderful Ancell Babes side that were a major force in Scottish football in the late 1950s.  He was Motherwell’s player of the year in 1959.

Sinjie, as he is known to ‘Well fans, scored around 80 goals in over 100 appearances in claret and amber.  His two and a half minute hat-trick against Hibs made the record books but that tale is one of many that fans of a certain age can recall. He scored six against the Brazilian side Flamengo in the 9-2 floodlight friendly. 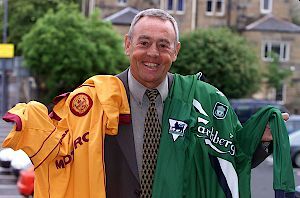 He joined Motherwell in 1957 and spent four years at the club before moving to Liverpool for £37,500, a record fee for both clubs.  Bill Shankly let it be known later that he would have paid twice that amount such was the talent on show.   That fee enabled construction of a new main stand, new named after Phil O’Donnell.

The famous forward line of Weir, Hunter St John, Quinn and Reid thrilled all who saw them.  St John capitalised on the service his skilled team-mates provided.

His career blossomed at Liverpool and he became a Red Legend. He scored the goal that gave Liverpool their first FA Cup and collected a couple of league championship medals before leaving in 1971.

He came back to Motherwell in 1973 as manager and stayed for fifteen months before he joined Portsmouth.  He introduced Bobby Graham and Willie Pettigrew to the team, they provided a fitting legacy.