Motherwell in robust health at AGM 115

Motherwell held its 115th AGM via Zoom on Thursday evening.  The chairman was pleased to report on the club's robust financial position.

The club board and the manager were joined together in a webinar with a few dozen shareholders to conduct the required formalities.  Thereafter questions were answered and Graham Alexander outlined his thoughts a month after taking up his post.  It all went very smoothly.

Jim McMahon welcomed participants and disposed of the official business thanks to the proxy votes that had been submitted in advance. 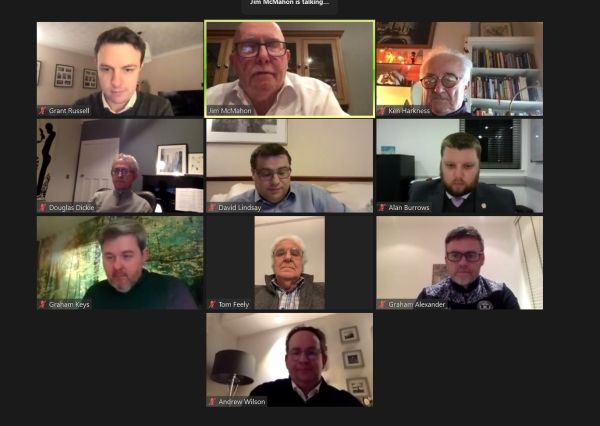 His remarks started with regret that fans were not able to be in the stadium and that the meeting had to be held remotely.  He stressed that the club could only succeed if all facets of the organisation performed "better than ok" and he was content that everyone was pulling in the same direction.

He said that the club would have cash in the bank at the end of this season and the next without having to call on the Well Society.  This would enable the Society to build its reserves and establish the buffer that had been in the initial plan.

Questions from shareholders followed and the following is a summary the responses.

The club has applied to the recently announced government loan scheme that has a 20 year interest free term.  It is thought that 11 of the 12 top flight clubs have asked to participate.

Funds had been made available and the hope is that they are "sufficient to stay up".  The squad has been enlarged to cover for injuries and will be reduced over the summer.  There was little discussion of the current playing staff though there was confirmation that Declan Gallagher is contracted until the end of the season.  The player is keeping his options open beyond that and the club will try to keep him.  Caution was urged when stories appear in the press.

There was no regret at the season ticket offer that included 19 entries to the stadium and work was ongoing about the next season ticket.  Clarification is awaited on the Business Interruption Insurance but the club "will do the correct thing".

Fir Park remains the focus in the medium term and work continues to enhance and improve the stadium.  The Hunter Stand has benefited and the final speaker in the new PA system is now in place.

Discussions are ongoing concerning greater club involvement and investment in the Dalziel Park training facility.  The club hopes the outcome will further develop the quality of the pitches and provide an even better training ground.

The manager talked about the hectic first month at the club and of his approach to management.  He has concentrated on instilling positive thoughts and has a longer aim of ensuring that the club punches above its perceived weight.  He looks to change the mindset when facing the 'big clubs'.  His family will relocate to Scotland.

The meeting finished after an hour and the chair thanked Graham with the (tongue in cheek) suggestion that a win over Hamilton on Saturday would secure his position!