Next up - Aberdeen on Thursday

Motherwell and Aberdeen will meet twice in four days at Fir Park.  The first encounter is on Thursday with a semi-final place in the Betfred Cup as the prize.  Can we overturn the odds and get a trip to Hampden?

Precedent does not favour the home side.  Our record against Aberdeen in knockout competitions does not bear examination.  Still, the current squad has little experience of past games as only Stevie Hammell played in the League Cup defeat in 2013 when we lost to a Dons side that had to play with ten men for 77 minutes. 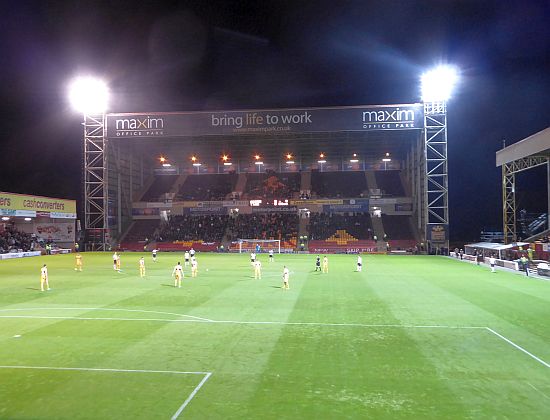 In the second round of the competition Aberdeen had a 1-0 win in Hamilton while Motherwell had an extra-time win in Dingwall thanks to MacLean’s late goal.

After four league wins Aberdeen’s league progress stumbled with draws against Hearts and Kilmarnock but the array of talent available to Derek McInnes will guarantee a testing time for the ‘Well defence.  Stevie May has three goals in the bank already and with backing from Rooney, Wright and Christie they are not short of attacking players.

Spirit are high in the Motherwell camp and many outside of the Fir Park dressing room have underestimated the effect of the sweeping changes Stephen Robinson made over the summer.  In the eleven competitive matches this season there have been only two losses. The point snatched under Neil Lennon’s nose at Easter Road on Saturday almost felt like another win and pointed to the growing team spirit that has us placed fifth in the table.

While the growing cult of King Louis fills many column inches it would be a mistake to undervalue the contribution that all in claret and amber make to the team.  And that support is also forthcoming from the strong list of substitutes.

A night under the floodlights with a decent crowd will set the scene for a cracking cup tie.  The semi-final draw will be made after the game but it may be delayed to allow for extra-time after a 1-1 draw after 90 minutes.