Next up - Dundee at Fir Park

Motherwell will welcome Dundee to Fir Park on Saturday and look for a reversal of the result at Dens Park a fortnight ago.

The Steelmen got a huge boost as they recorded a first three pointer at Livingston.  An added bonus came as they celebrated the first career goal for Liam Grimshaw and that feat must have been the focus of a few remarks as the team trained in this week’s sunshine.

More good news arrived at Fir Park when Steve Clarke announced his squad for the upcoming World Cup qualifiers.  Stephen O’Donnell and Liam Kelly were included for the games with Denmark, Moldova and Austria.

A single goal knocked Motherwell out of the League Cup when Lee Ashcroft scored late in the recent cup tie.  That produced the only win for the Dark Blues in their last four outings.  Draws against St Mirren and Hibs and a heavy thumping at Parkhead see the visitors with only two league points after the opening three fixtures.

Jason Cummings and Paul McGowan got the goals against Hibs last weekend but they conceded twice. 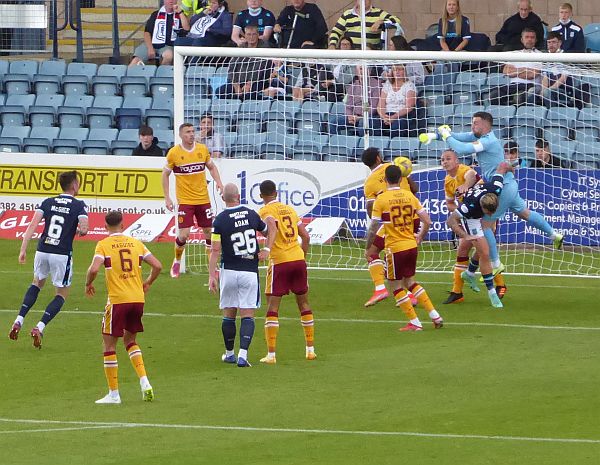 This will be the first game at Fir Park free of crowd restrictions.  Season ticket holders will be pleased to return to familiar seats and, with the visitors needing an additional allocation of tickets, we can expect a rousing atmosphere.

Home advantage may tip the balance and it might come again with a single goal. 1-0 to the Mighty ‘Well.

Remember the last visit of Dundee?